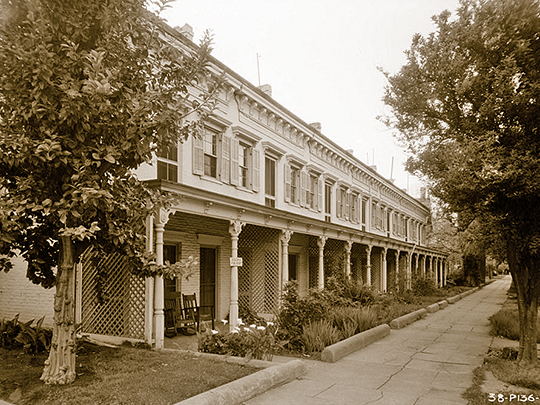 Commercial activity in the downtown area coincided with the beginning of the Gold Rush. As strikes were made in the northern foothills, miners sailed up the Feather and Yuba Rivers to reach the gold fields. Charles Covillaud owned a trading post and livestock ranch north of the confluence of the rivers. In 1849 he consolidated holdings, laid out a new town, and began selling lots. Other merchants moved quickly to exploit Marysville's advantageous location. By 1850 the town had become the main supply point for thousands of miners upriver in the foothills. Several dozen businesses operated from canvas tents and other impermanent structures along the Yuba River. The permanent population reached about 500.

Marysville grew rapidly in the 1850s. The town became the Yuba County seat in 1850 and incorporated in 1851. The population grew steadily, reaching around 4,000 by the end of the decade. Businesses grew in number and diversity. Many, from banks and blacksmiths to clothiers and saloons, appealed to miners. Capital investment increased too. Spurred by one flood and several major fires, businessmen replaced tents and other flimsy structures with larger buildings made of brick. Local kilns were kept busy, as nearly 140 brick commercial buildings went up between 1851 and 1855. The business district expanded north from the waterfront. Many local miners were immigrants from China, who sought goods and services from fellow countrymen. Part of the commercial district became their center for supplies and temporary housing. The permanent Chinese population in town rose to around 1,000 by the end of the decade. Marysville became Sam Fou, the third most important city for Chinese in California. Mixed use typified buildings throughout the district. Retail stores occupied the first story and residences the second.