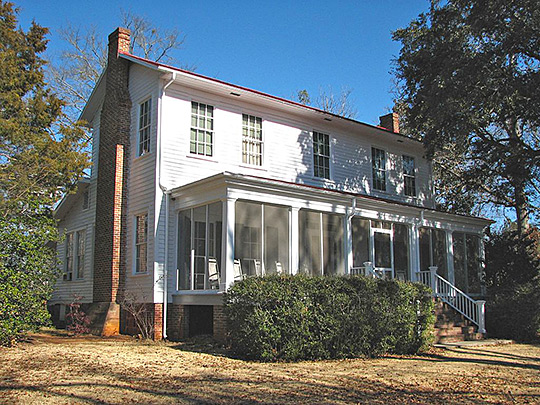 The City is named for John Milledge [1757-1818], a Revolutionary leader, member of Congress, Georgia governor and donor of most of the land on which the university was built.

Milledgeville, laid out in 1803 as the site of the state capital, retains the precision of its original plan. Three 20-acre plots were called Capitol. Government and Penitentiary Squares, and another plot "reserved for public uses" was later made into Cemetery Square. These squares enclose an area of 16 city blocks in which are most of the old houses. Capitol and Cemetery Squares are little changed, but the penitentiary has been removed and its site is now occupied by the Georgia State College for Women. Government Square is used as a recreation ground by the college.

The houses of Milledgeville typify the development of early 19th-century southern architecture. The earliest structures had small single-story stoops; the next had two porches, one above the other, with superimposed columns. When the Greek portico with full two-story columns was introduced, the second-story porch became a balcony; still later, mansions were built with broad, many-columned verandas that sometimes extended around three sides of the house. The well-proportioned classic portico with an elaborate doorway is more characteristic of Milledgeville homes, however, than are the spacious porches seen frequently in Athens and Washington. Although most of these houses are set too near the street, they still give an impression of serenity and aristocratic self-assurance.

In 1934 the city council voted to make Milledgeville a bird sanctuary, and the fact that birds are protected here is announced on all highways leading into town.

It is believed that this section was settled by the Hitchiti Indians before the coming of the Creek, and some historians have sought to establish a point on the eastern bank of the Oconee River, about 6 miles from the present city, as the site of a village which Hernando De Soto visited in 1540. A nearby Indian council place called Rock Landing was later the unloading point for all goods brought up the river.

Near the landing site of Fort Fidius, the largest garrison of Federal troops south of the Ohio, which was established here in 1793. Other forts constructed within the next few years included Fort Wilkinson, a few miles north, where representatives from 32 Creek towns signed the Indian treaty of 1802 and thereby ceded the lands of this section to the State.

When the newly acquired Indian territory was being developed under the land-lottery system, Louisville seemed too far east to remain the capital; consequently, in 1803 the legislature created this town near the center of the State and named it for John Milledge, Revolutionary soldier, who was then Governor. In 1807 the transfer of the treasury and the state records from Louisville to Milledgeville was made by wagons, escorted by a troop of cavalry sent from Washington, D.C., and Milledgeville became the second Georgia town to be laid out as a state capital.