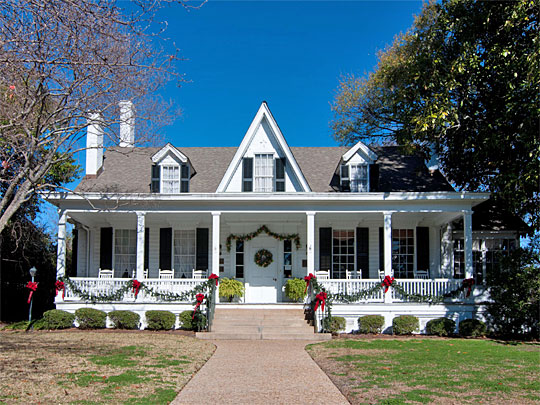 The State Legislature, in connection with the act to establish Bibb County in 1822, authorized the commissioners to lay off a plan for a county town to be called Macon, on the west reserve on the Ocmulgee River. The survey was made in the early part of 1823 by James Webb, the appointed surveyor. It was done in the form of a rectangle with wide streets running nearly north and south in parallels, and those in an opposite direction running nearly east and west. The first row of streets were named numerically one to eleven inclusive, and the opposite row were named Wharf, Walnut, Mulberry, Cherry, Poplar and Pine. At the time the survey was made there was not a single frame building within its limits. Thomas Tatum, in 1822, had built a log cabin, containing several small rooms, which was weatherboarded and used that year and in the early part of 1823 as a tavern and inn. At the upper ferry, just above First Street, there was a single cabin where Mr. E. C. Beard lived; he had been in charge of the old ferry since 1821. The Federal road crossed at his place.

In 1822 and 1823 number of immigrants came upon the reserve on the west side of the Ocmulgee. They were known as squatters, who without authority, and before the lots were sold, began the construction of what were called "board camps," which they inhabited. After the lots were sold they moved to the southwestern commons, established as an independent settlement, and became the first suburban neighbors of Macon. They named the suburb "Tigertown," after their ferocious leader, Tiger Jenkins, and well did he deserve the name. He is represented as having been a very rough and muscular man, with a visage as ugly as it was frightful. Like Attila the Hun, he could direct his followers to action by his grimaces, and without uttering a word in command.

The first frame house in town was located on the corner of Fifth Street, commonly called Bridge Street, and Wharf Street. It was built by Henry G. Ross and Dr. S. M. Ingersoll; the first story was occupied for a store, and the upper story for a dwelling. The house was neatly built and was painted white.