Photo: J. Pearl Jones House, ca. 1914, 401 Athens Street, Hartwell, GA. The House is architecturally significant as an intact example of a high style Neoclassical design. Neoclassical architecture was popular throughout Georgia during the first two decades of the 20th century, and virtually every town has at least one fine house in this style. Listed on the National Register of Historic Places in 1986. Photographed by user:User:Sjb1237 (own work), 2015, [cc-by-3.0 (creativecommons.org/licenses/by/3.0)], via Wikimedia Commons, accessed June, 2015. 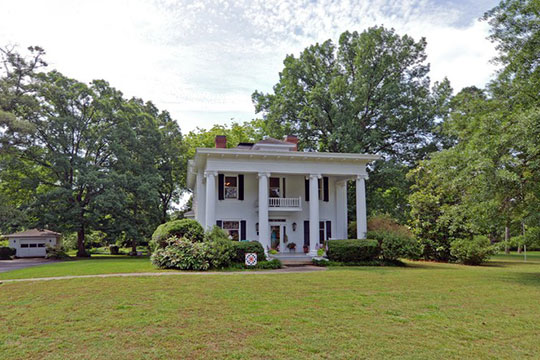 Even though the town of Hartwell was not incorporated until 1856, development appears to have started with the creation of the county. It was in this period that the first permanent signs of a community were visible. Following the donation of seven lots for government, religious, and educational purposes, an auction was held on July 6 and September 5, 1854, to dispose of the remaining 132 lots. The first buildings were constructed around the square or in proximity and were mixed commercial and residential uses. The square occupied the high point along the ridge line which sloped slightly to form the plateau where the nucleus of the community developed. The courthouse, a two-story frame building situated on Lot 1 at the northeastern side of the square, was the first building completed. John B. Benson, one of the founding fathers, was instrumental in other development. He is credited with building the first residence, a structure of "pine logs, split in halves, close fitted and chinked;" the first store, a frame building on the southwest corner of the square; and additional residences and commercial buildings. A two-story frame jail on Lot 6 and several frame hotels were other early buildings in the town. During this period, it appears the majority of structures were of wood, but there were several structures of brick, including an antebellum brick commercial structure built by I. N. Reeder on the square and a two-story brick courthouse, built on the public square in 1856 as a replacement for the original frame structure.

The immediate growth of the community in the late 1850s is evident in the early expansion of the town. The original town limits set at 400 yards in each direction from the town square at incorporation in 1856 were expanded two years later to one-half mile. Development was halted by the Civil War, but no war-related destruction occurred in Hartwell, and the 1870s was a period of slow recovery. The 1870 town population was 154, with 123 white and 31 black citizens. By the end of the 1870s, the county-seat town had evolved to include residences, commercial enterprises, and permanent buildings for educational, religious, and government functions.