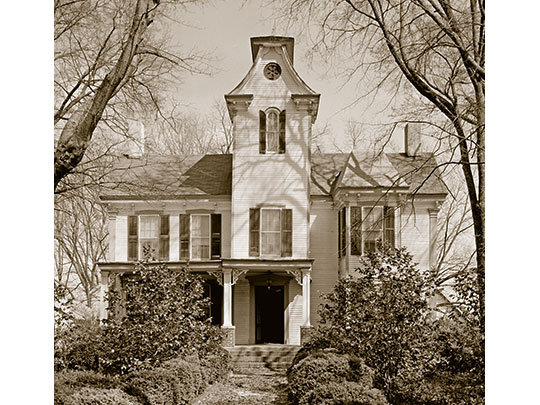 Eatonton, seat of Putnam County, was incorporated in 1809 and named for William Eaton, Revolutionary officer and naval agent to the Barbary States. The town was settled by owners of large plantations and became a seat of antebellum culture. A number of old houses remain. Some of the older Negroes who gather around the town square are not unlike Uncle Remus, the popular character created by Joel Chandler Harris, who was born in Eatonton in 1848, and lived in Putnam County until young manhood. Before the War between the States the region around Eatonton was devoted chiefly to the cultivation of cotton, but now the farmers take an active interest in dairying and in the improvement of livestock.

The Joel Chandler Harris Monument, on Jefferson Street, is near the eastern entrance to the courthouse. Although Harris' character Uncle Remus is a composite creation, many of his traits were those of Uncle George Terrell, an old slave who baked ginger cookies in his Dutch oven to sell in Eatonton on Saturdays. The children of the planters liked to visit the old man's cabin and sit before a snapping fire amidst the spicy smell of the cakes, listening to his stories.