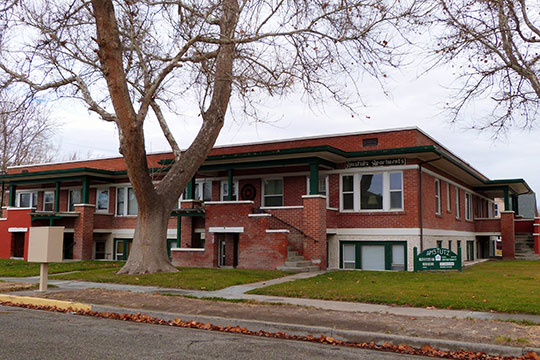 Originally, Elmore County was part of the vast Alturas County, Idaho, which was created by the First Territorial Legislature of Idaho on December 1863. Alturas County included all of the land north of the Snake River from the mouth of the Bruneau River to Little Lost River and as far north as the Sawtooth Mountains.

In 1889, the last Territorial Legislature of Idaho divided Alturas County creating several smaller counties including Elmore County. The first county seat was established in Esmeralda and later moved to Rocky Bar. In 1890, it was moved to Mountain Home. Several townships were annexed to Elmore County from Owyhee County in 1931. These townships are located in the southwestern part of the County north of the Snake River.

Early accounts of the area tell of gold and silver strikes and of many frustrations. Gold was discovered in 1863 at Rocky Bar and in 1864 at Atlanta. The rugged terrain and the distance that ore had to be hauled made the Atlanta gold expensive. Rocky Bar/Featherville area had an easier time getting their gold out.

Aside from the mining communities, the first permanent settlements in Elmore County began in 1883 when the Union Pacific Railroad, then called the Oregon Short Line, built its main line across the southern part of the County. The railroad stimulated agriculture and Elmore County became one of the leading stock-raising counties of Idaho. Mountain Home, the County seat, was moved from its location on Rattlesnake Creek, where it emerged from the foothills, to its present location on the railroad line. It was a small community until the advent of the Mountain Home Air Force Base, when it began to develop. Mountain Home continued to grow until 1963 when construction was completed on several missile sites within the area. The community has experienced steady growth since 1967.