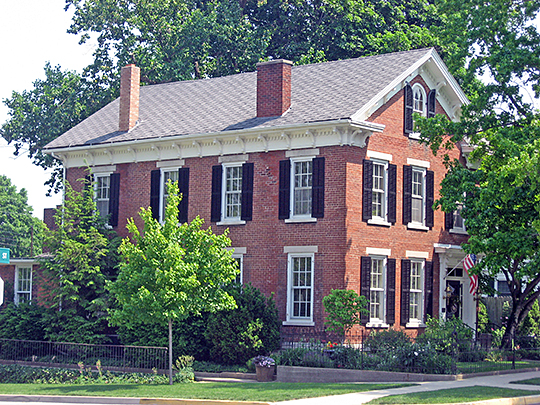 Delphi is located in Deer Creek Township. The township is responsible for providing fire protection, emergency poor relief, and care for some cemeteries.

Delphi, seat of Carroll County, was an important port of call in the days of the old Wabash and Erie Canal. The town presents a conspicuously neat and orderly appearance with its small, square brick business buildings and comfortable residences.

On the north side of Main Street, about 130 feet east of the corporation line, is a marker designating the site of the Cabin of Samuel Milroy [1780-1845], a member of the State Constitutional Convention of 1816, and a leader in the organization of Carroll County. It was Milroy who suggested the name of Delphi to the county commissioners, and sold the first lots in 1828.

Across Deer Creek, at the southern edge of town, is Riley Dam, named for James Whitcomb Riley (writer and poet, 1849-1916), who spent many hours fishing near the spot. The dam, constructed with funds obtained by public subscription, was completed in July of 1930. It was here that Riley got his inspiration for the poem, On the Banks o' Deer Creek. Riley Park is a 10-acre recreation area extending from the swimming pool to a high bluff to the south.