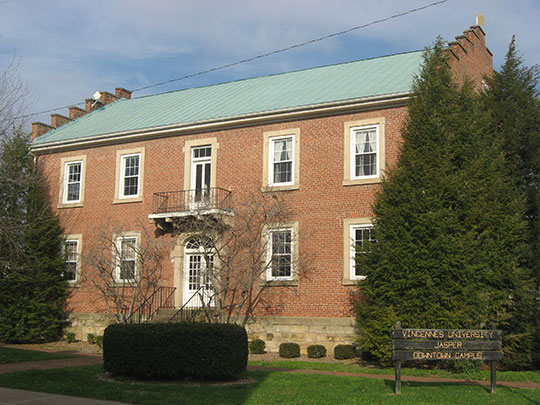 The City of Jasper's [‡] origins can be traced back to where the current Jasper City Mill now stands along the Patoka River. The river was important to Jasper's early settlement as served as a means of transportation for goods and services, and as a source of water power for grist mills. Jasper's earliest local settlers were English-American Protestants mostly from the Kentucky-Tennessee area. Andrew Evans moved to Jasper around 1817 from Kentucky and built the first grist mill and wooden dam near the present-day 3rd Avenue bridge. In 1820, Joseph and Eleanor Enlow purchased the mill from Andrew Evans, and proceeded to donate approximately eighty acres in an effort to relocate the county seat from Portersville to Jasper. Eleanor Enlow is also known for selecting "Jasper" as the town name. The name was chosen from a passage in the Bible (Revelations 21:19) which states "and the foundations of the wall of the city were adorned with all manner of precious stones...the first foundation was of Jasper."

In 1829 the State legislature passed a bill establishing Jasper as the county seat of Dubois County, and Jasper was officially founded in 1830. The first county courthouse burned in 1839, and a new brick courthouse was completed in 1847. This structure was built under the guidance and leadership of Fr. Joseph Kundek who was one of the primary forces that shaped Jasper's early settlement. By the early 1900s, local leaders determined the courthouse could no longer accommodate growing demands. The courthouse was torn down in 1909 and the courthouse that stands as the focal point of the courthouse square today was completed in 1911.

Under the leadership of Fr. Kundek, the first resident Catholic Priest in Jasper, the community experienced an influx of German settlers from the 1830s until around 1860. The local population began to grow, and was comprised of German immigrants from villages such as Pfaffenweiler, Reute, and Wagshurst, as well as from villages in Bavaria and Baden among other German states. By 1850, Jasper's population stood at approximately 532 residents. Some of the local businesses established by this time to serve these residents included five general stores, two groceries, two warehouses, a grain mill (along the Patoka River) and a distillery and brewery. Jasper was incorporated as a town in 1866.

The first railroad was constructed in 1879 and connected Jasper to Rockport. In the 1890s the city developed its waterworks system (1894) and constructed an electrical plant (1898) to serve residents and businesses. In 1907 the Southern railroad extended the tracks north to French Lick. Like communities throughout the nation, the railroad ushered in tremendous growth in Jasper. It was also during this period the various woodworking and furniture industries flourished in Jasper. This influx of German craftsmen helped shape Jasper into an outstanding furniture manufacturing community, particularly in the office furniture field. Many of these original factories were concentrated along the river, as well as along Vine Street between 14th and 4th Streets just east of the courthouse square. One of these operations, the Jasper Desk Company, represents the oldest wood office furniture manufacturer in the United States. The company began as the Alles Brothers Furniture Company in 1876, and later renamed the Jasper Furniture and Desk Co., and ultimately to Jasper Desk Company. Due to the community's impressive collection of wood industries, in the 1930s Jasper began to bill itself as the "Nation's Wood Office Furniture Capital." Jasper was incorporated as a City in 1915, and by 1920 had a population of just over 2,500 people.