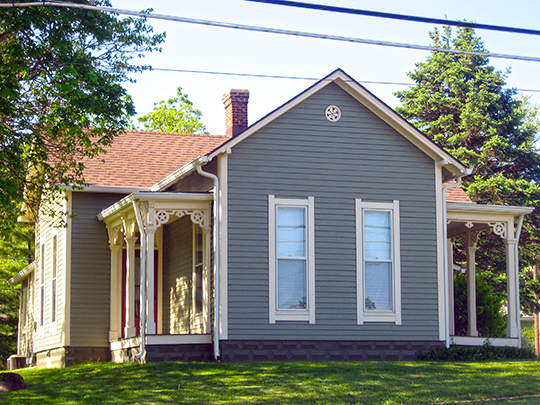 The earliest inhabitants of the Danville area were the Delaware Indians who lived in the area until their land was relinquished to the Federal Government in 1818 in the Treaty of St. Mary's. By the early 1820's, the first white settlement was established along the banks of the White Lick Creek; and in 1824, by act of the Indiana General Assembly, Hendricks County was officially established. The county commissioners were given the task of establishing a county seat, and the agreed that the location should be in the geographical center of the county. As a result, Danville was born. On July 14, 1824, a stake was driven into the ground marking the location of the county courthouse. By October, Thomas Hilton had completed the plat of the town which he laid out around the courthouse square. The entire 80 acres that comprised the town were sold by public auction over a period of three days at a price of three dollars ($3.00) per plat.

The town was incorporated in 1835 with a population of approximately 200 people. It was named "Danville" after Daniel Wick, brother of William Wick, the circuit court judge in the county at the time.

The New Town Hall in Danville has a unique historic background. The buildings story begins in Lodoga, Indiana in 1878 where Central Normal College packed up their books and headed to Danville to start a new campus. Then in 1947 the school was taken over by the Episcopal Church which renamed the university Canterbury College. The building was inherited by the Danville Community School Corporation in the late 1950's. The building was used as the High School 1960 for Danville until they built a new building in 1973. That same year it became the Jr. High School up until the Town took possession in 2009.

Almost over 100 years of Danville Heritage was handed over to the Danville Parks Department. In 2009 the Danville Community School Corporation gave the Town of Danville the chance to purchase the Jr. High for one dollar. The Town leaped upon the chance to gain this historic landmark. The sale of the Jr. High put most of the Towns Departments offices in one building. In these transactions the Park and Recreation Department took over the responsibilities for several areas of the building; the Bosstick gym, Hargrave gym, the Grid Room and two class rooms which were named Canterbury and Central Normal rooms.

The importance of this building in Danville is that it was the first recreational area in Danville. In 1913 the Town Council purchased 20 acres of land east of the College property for the purpose of recreation, sports, and educational opportunities for town citizens. The space is now known as Ellis Park. Ellis Park is the main recreational area in Danville to this day. In 1977, the Town Council decided that additional park land was needed and so approximately 30 acres of agricultural land was purchased just north of Ellis Park to expand the Danville Park System.

In 1992, the Jeanette Blanton Family donated 53 acres family owned land to the Town of Danville, with the agreement that the land would only be used for the study of nature. The Park Department for the Town took over operations and maintenance of the land. Trails and bridges were built throughout the property for public use. In 2003 a bridge was constructed over White Lick Creek connecting Ellis Park and what is now Blanton Woods. In 2000, the Town purchased an additional 20 acres and the Blanton residence. The facility was transformed into a banquet hall that now accommodates meetings, conferences, weddings and other events.