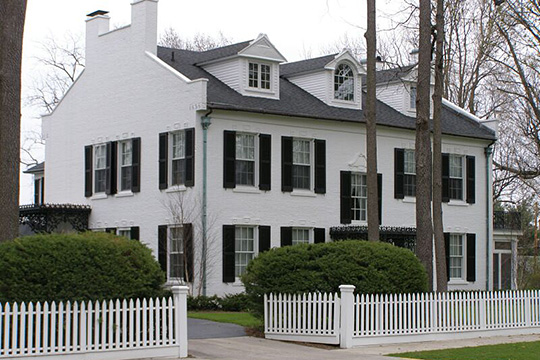 In 1813, three men, Williamson Dunn, Henry Ristine, and Major Ambrose Whitlock, looked over the area that would later be known as Montgomery County, and determined that the location would be ideal for a settlement. Ten years later, the three men returned with their families. In 1823, Montgomery County was officially delineated, and Crawfordsville, which was platted that same year by Major Whitlock, was designated as the County seat. The County was named for Revolutionary War hero Major General Richard Montgomery.

All of the odd numbered lots within Crawfordsville were dedicated to public use. Major Whitlock named the new city "Crawfordsville" in honor of the Secretary of the Treasury, William H.Crawford. It was Mr. Crawford who had issued Major Whitlock his commission as a Receiver of Public Lands. Crawfordsville quickly became a booming city of commercial importance. As a prosperous city in the mid 1800s, Crawfordsville also became home to several prominent politicians and political activists. One such political cause was the abolitionist movement which sought freedom for those enslaved in the United States. The most notable abolitionist in Montgomery County was a man named John Allen Speed. Mr. Speed and many others helped slaves escape from the South through what was known as the Underground Railroad. While many cities and counties across Indiana boast of their locations thought to be a part of the Underground Railroad, the Montgomery County Historical Society has confirmed at least fifteen (15) Underground Railroad "depots" in Montgomery County. One of the 15 depots includes the home of Mr. John Speed, which was constructed in 1845. This site has been restored and has been relocated to the grounds of Lane Place.

The abolitionist cause also gained a great deal of support from the professors of Wabash College. The College, established in 1832, was first known as the Wabash Manual Labor College and Teachers Seminary. Today it operates as a private, all male liberal arts college.

By the mid 1800s, the College had gained Crawfordsville the nickname of "Athens of Indiana," because of the number of authors who resided in the area. The most notable of these authors was General Lew Wallace, the author of Ben Hur and The Prince of India. General Wallace attended the college for only eight weeks but later moved to Crawfordsville to establish his law practice. General Wallace served in both the Mexican and Civil Wars and later served as both the governor of the New Mexico Territory and as the U.S. Minister to Turkey.

General Wallace was not the only notable politician with ties to Montgomery County. Henry Smith Lane, a former Indiana Governor and United States Senator for the Whig party, was instrumental in the 1860 campaign to elect the first Republican President of the United States: Abraham Lincoln. Mr. Lane was the founder of the Indiana Republican party and served as the first Republican Governor of Indiana until he was called to fill a vacancy in the U.S. Senate during the Civil War. A close colleague of President Lincoln, Mr. Lane served as a pallbearer at the President's funeral. Visitors to Montgomery County today can visit "Lane Place," the Lane family's antebellum mansion constructed by Mr. Lane and his second wife, Joanna.

In addition to the rich cultural sites listed above, many historical treasures await visitors to Crawfordsville and Montgomery County. Among the noteworthy sites are the boyhood home of artist T.C. Steele; the General Lew Wallace Study & Museum, once General Wallace's personal library; the Old Jail Museum featuring the nation's only operating rotary jail cell block; the Colonel Isaac C. Elston House; the Montgomery County Courthouse; and St. John's Episcopal Church. These historic sites capture a rich history in which the residents of Crawfordsville can be proud of.