Photo: The Boulders, ca. 1910, 835 East Washington Street, Greencastle, IN. Listed on the National Register of Historic Places in 1993. Photographed by User:Nyttend (own work), 2011, [cc0-by-1.0 (creativecommons.org/publicdomain/zero/1.0/deed.en], via Wikimedia Commons, accessed December, 2013. 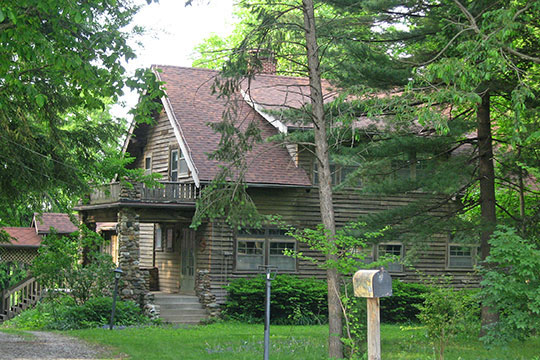 Indian settlement was sparse in Putnam County due to the lack of any large rivers. An Indian treaty called the Ten O'clock Treaty, was signed in 1809. The treaty line ran through what is present day Cloverdale and Washington Townships, and by 1816 Indiana achieved statehood.

In 1821, Putnam County was legally created. Washington Township was the first area in the County to be developed. Greencastle then developed in the center of the County with a gift of land from an area farmer. Settlement proceeded from the southwest portion of the County in 1818 and spread throughout the township along its western edge. The southern and central areas were settled next and the northwest corner was the last to see settlement.

Typical patterns of development began around a mill, a crossroads, or a small store. Farming and logging were typical activities in the area. Access to markets was always a problem in the County and the building of the National Road (U.S. 40) beginning in 1827 was a critical link to the east and west. Towns such as Putnamville were founded along this roadway. Other small county roads were developed as toll roads for local through traffic and were later developed into U.S. 231 and U.S. 36.

By 1852 the railroads came to Putnam County. First an east-west line, then a north-south line was built. Throughout the rest of the 1800's a number of rail lines were constructed throughout the county. These rail lines spurred the development of numerous towns such as Cloverdale and Bainbridge. Other towns that were bypassed by the railroads struggled to keep pace. An interurban line that connected Indianapolis and Terre Haute traveled through the County until 1940. The addition of I-70 in the 1960's brought another important transportation link to the county. The improved vehicular access to the southern portion of the county has spurred retail and industrial development in this area in the 1960's through the present day.

Industry in Putnam County was dominated by farming and logging activities throughout the 1800's. Brickyards, furniture factories, pottery, and iron products were spurred by railroad access. The 1900's saw the addition of other manufacturing ventures and mining activities. The farming industry continues to be the major employer along with DePauw University and the State Prison near Putnamville. Recreation and tourism is increasingly becoming an important aspect of economic development activities in the County.