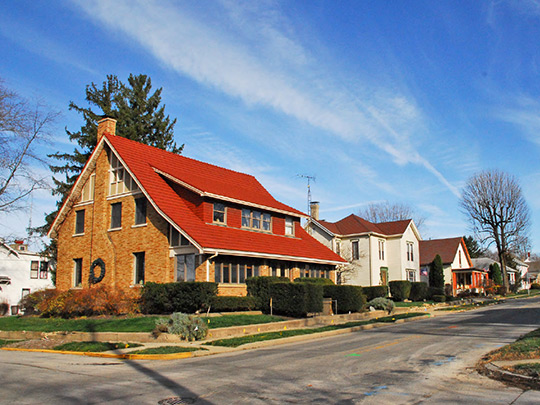 Liberty was originally platted with sixty-four lots surrounding the courthouse square. At the time of incorporation in 1836, the village was home to fifty-three residents. As the town grew, people built homes on roads/streets that led from the center of the town. Indeed, Liberty had achieved such size that in 1848, the Liberty-College Corner Turnpike was constructed as part of a larger road that connected Fort Wayne to the Oxford Road (originating in Ohio). It was the first state-funded improved road in the county, providing much needed access from rural farms to the county-seat, and on to larger markets. This road eventually became part of the Liberty-Brownsville Turnpike, a busy thoroughfare that served the southeastern part of the state. By 1849, Liberty boasted 110 houses containing 370 residents, as well as numerous civic and religious facilities.