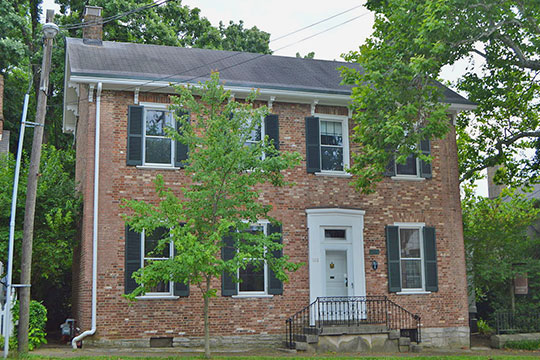 Versailles, seat of Woodford County, was named by General Calmes for Versailles, France, as a tribute to Louis XVI for his timely aid in the Revolutionary War. The town was established in 1792 on the lands of Hezekiah Briscoe, an infant, the title being vested in "a number of gentlemen landowners," among whom was General Marquis Calmes. The town site is a circle whose radius is 600 yards and whose center is the courthouse. On Main Street is the site of Watkins Tavern, a noted inn of early days kept by Henry Watkins, Henry Clay's stepfather. The old landmark burned down about 1932, being, at the time, considerably more than 100 years old. Margaret Hall, an Episcopal school for girls, is a fine example of the mansion of ante-bellum days. Near the eastern edge of the campus is a monument to General Calmes.