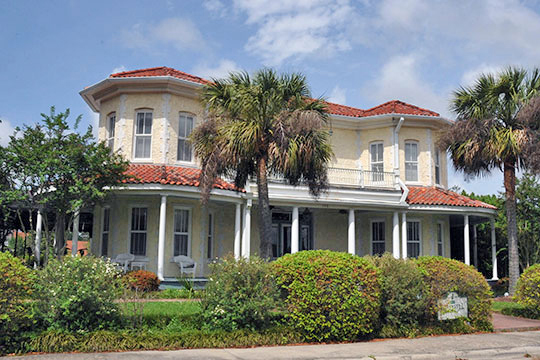 Located on the Vermilion River, the town of Abbeville traces its founding to 1843, when Father Antoine Megret purchased a tract of land on the river for construction of a chapel. This developed into the settlement that would be incorporated as Abbeville in 1850. In 1854 it became the parish seat of Vermilion Parish. Apparently the town was small and grew slowly until the arrival of the Iberia and Vermilion Railroad (soon to be the Southern Pacific) in 1892. With the coming of the railroad, Abbeville emerged as a major rice processing center. Like other southwestern Louisiana communities (for example, Crowley and Jennings), Abbeville benefited enormously from the "Great Louisiana Rice Boom" of the turn-of-the-century in which mechanized agricultural techniques previously used in the Midwest for wheat production were brought to the prairies of Acadiana for the large-scale production of rice. Rather remarkably, the two large brick rice mills that appear on a 1907 Sanborn map of Abbeville survive. They, along with other businesses which relied upon the railroad, are an important component of the nominated district.

Because of the railroad and the rice boom it made possible, Abbeville grew rapidly (from a population of 1200 in 1895 to 2500 in 1907) and prospered greatly. Despite its early founding, there are believed to be no buildings in the town that pre-date c.1890. The Downtown Abbeville Historic District to a great extent reflects the frenzy of building that occurred in Abbeville at the height of the rice boom (c.1890-c.1910). Also, much of the old wooden downtown burned in 1903 and was rebuilt almost immediately.