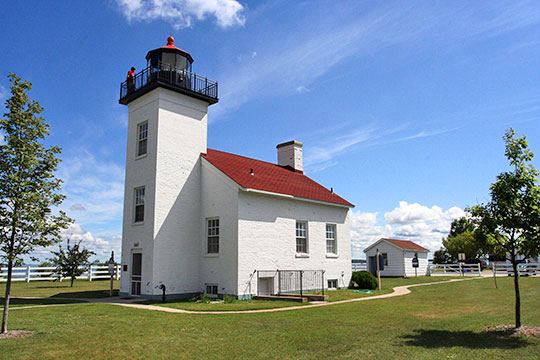 First platted in 1823, the site of the City of Escanaba was initially occupied because of the lumber industry but the primary catalyst of its growth and built environment was the Upper Peninsula iron industry. The establishment of the N. Ludington and I. Stephenson mills near the mouth of the Escanaba River provided the initial boost in the third quarter of the nineteenth century. However, the construction of rail connections linking Escanaba's fine natural harbor northward to the Marquette Iron Range and then westward to the Menominee Range by the last quarter of the century determined the city's future. Ore docks dominated the city's lakeshore and the city developed along Ludington Street, which paralleled the ore docks and rail yards. Development spread westward and buildings that survived fire and demolition reveal a general progression in age from east to west, anchored by the House of Ludington, portions of which may date to the 1860s, in the 200 block on the east, to early twentieth-century small-scale commercial buildings in the 1600 block on the west. Exceptions to this trend are larger complexes that developed on what was then the edge of the commercial district, such as the Richter Brewery in the 1600 block and Stegath Lumber in the 1800 block.

The most notable characteristic of Escanaba is the linearity of the business district. The primary business artery, Ludington Street, extends west from near the Sand Point lighthouse on Bay de Noc to the junction of M-35 and U.S. 2/U.S. 41 and beyond. The entire business district is well over a mile and more than two dozen blocks long. As Sawyer notes in his 1911 History of the Upper Peninsula, the original city of Escanaba was "really located on a point of land dividing Green bay from Little Bay de Noc, which accounts for the unusual length of its main business street for a place of its size and population."