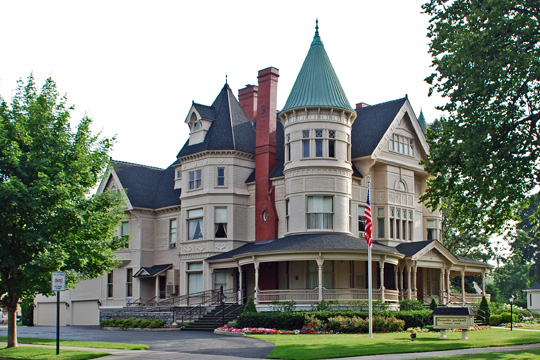 Natural beauty and vital economies have, in different ways, always drawn people to this part of the Great Lakes Basin. At the same time, they symbolize a rich life to be had here and make it possible.

Around 1400 A.D., native peoples settled here and teepees lined the Lake Michigan shore for hundreds and hundreds of miles. They appreciated the blessing of the land and water, but they were nomadic, following the cycle of growth from the coast of Lake Michigan in the spring, summer and fall south to Southern Michigan and the area south of Chicago. Fish, game and sufficiently rich soil enabled them to raise large gardens creating their prosperity. Although the Native Americans hunted and trapped, they made their living as crafts people and excellent traders, using these skills with a progression of European nationalities of people.

Pioneers began to involve themselves and their fortunes in the Traverse City area at a rapid pace. Missionaries began settling here first. Later, from the 1840's to the early 1900's, lumber was dwarfed by all other industries in Traverse City as a small clique of pioneers and entrepreneurs raised it from a muddy village near a lumber camp to a spirited town yielding stylish lifestyles for some and a good living for many. Lumbering stripped the land of most of its timber before World War I, and at that point, cleared fields began to be used for growing cherries.

Agriculture has continued to be important in the area's economy, but the beauty of its clear water, rolling golf courses, sand dunes and quaint towns has brought tourism to the fore in the overall economic picture. Residents and visitors continue to love this area for its natural attributes and seek a balance between ecology and economy.