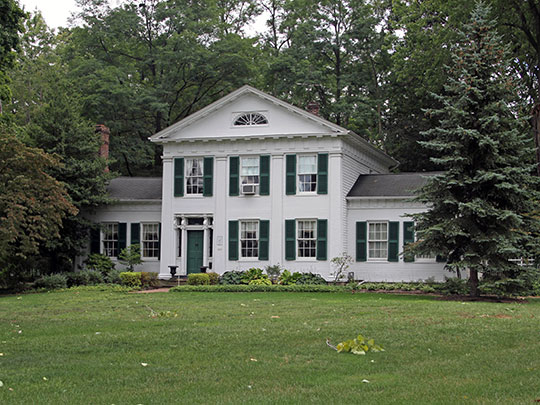 According to local historian Carl Thomas Engel's account of Painesville's history as found on the Morley Library website [2], the City dates back to 1800 when a band of sixty-six pioneers first settled what was then part of the Western Reserve. This group was led by John Walworth and Revolutionary War veteran, General Edward Paine. In that same year, the Western Reserve became Trumbull County which was subsequently divided into eight political townships, the smallest of which was named Painesville. The township government was organized in 1802 and the post office was opened in 1803 with John Walworth as postmaster.

The settlement area which grew to become the City of Painesville was originally named Oak Openings by Mr. Walworth and General Paine in deference to the prevalent oak trees and sandy soil. In 1805, General Henry Champion laid out a village plan which he named Champion. In 1832, when this portion of the Township was incorporated, the name was changed to Painesville.

In 1840, Lake County was created from portions of Geauga and Cuyahoga counties, and Painesville was designated the Lake County seat. Painesville became a town in 1832, a village in 1852, and a city in 1902.