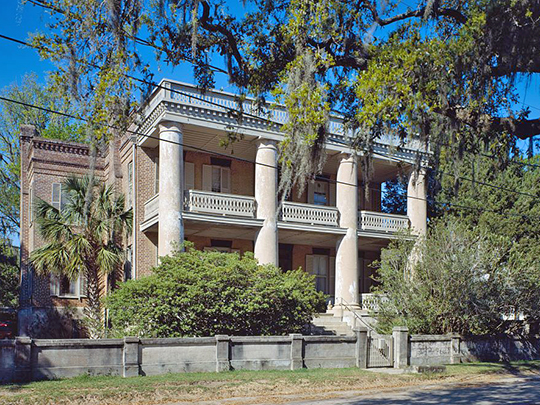 Beaufort, second oldest town in South Carolina, is a settlement on Port Royal Island, one of 65 islands that make up Beaufort County. Although the town has a turbulent history of wars and hurricanes, it preserves a distinctive charm and tranquility. Handsom old houses wear the patina of time. Old fashioned gardens bloom colorfully and fragrantly. Scarlet poinsettias are framed against tabby walls. An avenue of palmettos lines Boundary Street. Great, spreading live oaks, festooned with Spanish moss, weave shifting patterns on narrow, winding streets. Lush grass slopes down to the ancient sea walls. Through green vistas, the gray-green river gleams, and beyond the river stretches the bay.

Originally laid out by order of the Lords Proprietors, the plan of Beaufort is a regular grid superimposed on the first lowlands of Port Royal. Modified to fit the irregular shoreline of the Beaufort River, the plan has remained virtually unchanged.

The town's history dates from 1581 when Spanish rovers first named the harbor Punta de Santa Elena. Jean Ribault called it Port Royal when he came with his Frenchmen in 1562 to make the first Protestant settlement in North America. Two years later, the Spaniards arrived and stayed for a decade. William Sayle, in 1670, brought the first English colony to South Carolina, remained for a short time in Port Royal and moved on the settle Charles Town. A Scotch colony under Lord Cardross came in 1684 and existed for 2 years before being destroyed by the Spaniards.

When the town was laid out in 1710 and named for Henry, Duke of Beaufort, a Lord Proprietor, seasoned planters from Barbados and other colonies settled there, along with tradesmen and adventurers.

The town was practically wiped out by Yemassee Indians in 1715. It was conquered by the British in the American Revolution, and threatened by English gunboats in 1812. On November 7, 1861, the village and the surrounding sea islands — an unusually wealthy area — fell to the strong Federal fleet which attacked Hilton Head and Fort Beauregard. Union soldiers occupied the city during the remainder of the war; many of the great houses used as Federal hospitals, and most of the town was saved from destruction.