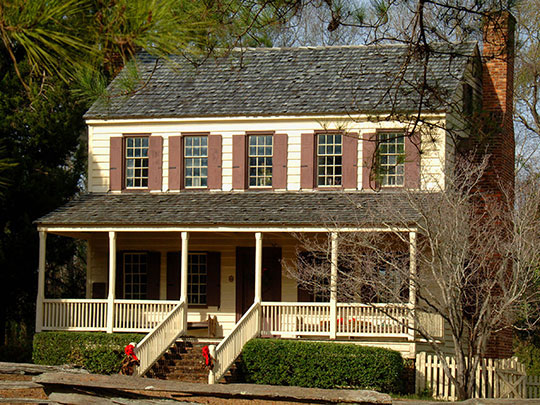 The Town of Kingstree is located in central Williamsburg County fifty miles west of the Atlantic Ocean. Kingstree is the county seat and serves as the commercial center for the surrounding area. It is located on the major north-south highway U.S. 52 which connects Charleston and Florence, South Carolina. Kingstree is also served by the Seaboard Coast Line Railroad.

Ulster Scots began moving into the Kingstree area in the 1730s. Although the town of Kingstree was surveyed in 1737, there were few buildings constructed in the area in the eighteenth century. In 1800, the town consisted of several stores and a few small homes.

With the construction of the Williamsburg County Courthouse ca. 1823, Kingstree began to grow into a small community. Between 1830 and 1860, several substantial frame vernacular homes, such as the Scott Hauenstein House, were built by the wealthier landowners of the area. Construction of the Northeastern Railway through Kingstree in 1856 also contributed to the town's growth. After the Civil War, Kingstree continued its slow growth with its economy based chiefly upon cotton production.

The majority of the buildings in the Kingstree historic area are representative of Victorian vernacular architecture of the early twentieth century and are situated along Main Street, Academy Street, and Hampton Street. This commercial block is unified by a predominance of one to three story brick buildings with decorative brickwork and cast-iron storefronts. The majority of these buildings have a unified setback and share common walls.

The residential areas branch out on all sides from downtown Kingstree. Although Kingstree contains many residences of architectural merit, there is no one compact area which is conducive to the identification of a residential historic district.