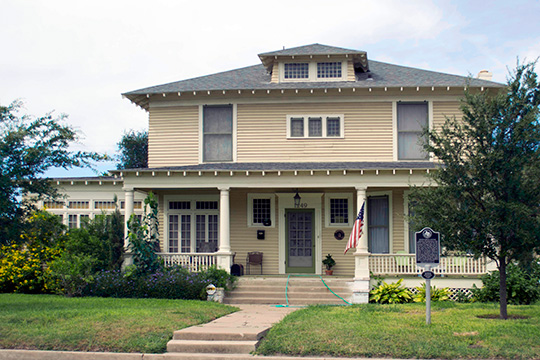 Brownsville was founded as a riverboat town, but curiously did not incorporate a formal commercial space or "broadstreet" into its layout. This plan type is common throughout early 19th century U.S. cities with riverfronts and is seen in Rio Grande City and Roma; upstream contemporary riverboat towns that have centrally located double width streets perpendicular to the Rio Grande.

Historic Downtown is generally recognized as the historic commercial area within International, Fronton, 6th and Jackson Streets. This area is largely the subject of this revitalization plan, but its peripheral areas are functionally related and ultimately essential to downtown revitalization and a productive central city.

The ca. 1848 Original Townsite was a 1,584 acre area containing 308 numbered blocks with a street grid rotated 45 degrees from the cardinal points. The plan abutted Fort Brown on the southeast and fits neatly between the somewhat parallel configuration of the Rio Grande and Town Resaca as their courses then existed.

Except for St. Charles, Levee and Elizabeth Streets, the longitudinal streets are named for U.S. presidents and the lateral streets are numbered with 1st Street the more northwesterly. Many of the streets have been designated as one-way within the Original Townsite. Curb parking is nearly universal and within historic downtown is metered. Elizabeth, Washington and Adams Streets have been landscaped with sidewalk pavers and trees and furnished with benches and trash receptacles and there is a modicum of shade and pedestrian amenity.

In the more intensely developed downtown, the alleyways are paved and heavily used for rear access service and utilities, while in the more residential areas they are gravel surfaced, less used and vary in condition and maintenance. The alleyways were originally named and recently signs have been installed in historic downtown.

The downtown area is comprised of three roughly concentric areas defined as the Central City, Greater Downtown and the Urban Core.

The Central City reflects the general limits of ca. 1940 Brownsville, and has an urban pattern capable of supporting a pedestrian and local transit oriented environment.

Greater Downtown lies within the Central City, generally reflects the limits of ca. 1900 Brownsville, and has an urban scale and grain that nominally supports a pedestrian and local transit oriented environment.

The Urban Core lies within Greater Downtown, generally reflects the ca. 1848 Original Townsite and retains its historic urban pattern. The pedestrian and local transit oriented environment is pervasive and supported by the scale and grain of the urban pattern.

Historic Downtown lies within the Urban Core of which it occupies about a quarter of its area. It is an area of intense pedestrian activity supported by the compact form, commercial use and historic character of its urban pattern.