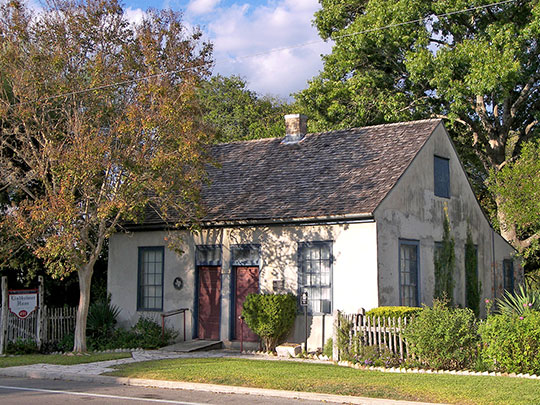 New Braunfels is an industrial city whose founding added a colorful chapter to the history of Texas. A spick-and-span neatness and a wealth of quaint old houses create a distinct and faintly Old World atmosphere. Here the quixotic Prince Carl Zu Solms-Braunfels, for whom the city is named, established a German settlement in 1845 and, surrounding himself with a retinue of velvet-clad courtiers and soldiers who wore brilliant plumes in their cocked hats, amazed the matter of fact Texas pioneers with his magnificence. The Prince was commissioner general for the Society for the Protection of German Immigrants in Texas, an association of noblemen which undertook to place a great number of colonists. Before the enterprise was well under way the officers of the company discovered that the land they had accepted for colonization was no longer available, as the contract had been canceled. The Prince met a group of immigrants at Carlshafen, later to be called Indianola, headed inland and finally located on the Comal River. He purchased the site of the town, two leagues of land, from Rafael and Maria Veramendi Garza, of San Antonio, for the sum of $1,111. About 200 immigrants founded the town on Good Friday, March 21, 1845.

On a high hilltop where he could command a view of the country for miles around, the Prince built his fort. Lacking a German flag, he raised the flag of Austria above the building and called it Sophienburg, in honor of his "ladye." The Texas flag was also raised. Here he lived for a short time in great style. When he received Indians he appeared in the full dress uniform of the Austrian Army, of which he was an officer.

The followers of the Prince could not adapt themselves to the wilderness, and lack of training resulted in great privations and hardships. There was much suffering during the first years of the settlement. Prince Carl resigned his post and returned to Germany following the annexation of Texas in 1845, leaving New Braunfels even before John O. (Baron von) Meusebach, his successor, arrived.

Approximately 5,000 Germans were landed at Indianola within the next seven months, but no means of transportation from the port to the colony was available. A contract made with teamsters was broken because the outbreak of the war with Mexico led to higher-paying army contracts. The colonists were poorly housed at Indianola and soon exposure and hunger brought on an epidemic of a disease that has not been clearly identified. Scores died and in desperation hundreds of others attempted to walk from Indianola to New Braunfels. Weakened, and without sufficient supplies, a great many more died on the way. "The trail from the coast town to the colony was lined with German graves." Those who survived to reach New Braunfels brought the pestilent fever with them, and it spread rapidly through the community. "Two or three died in New Braunfels each day." The total number of deaths from the epidemic, as reported by various authorities, differs greatly, but it was certainly more than 800 and may have been 3,000. Because of suffering and privation many of the settlers, disheartened and broken in spirit, left the town. Meusebach resigned his post in July, 1847. The company continued to administer the affairs of the community until 1853, when an assignment of rights and properties was made to Texas creditors.

There has been little fusion with other races since pioneer days, and New Braunfels' population remains typically German. That is still the predominating language, taught, along with English, in the public schools, and often used on sign boards. Old-time customs and culture are preserved in the homes and in community life.

One peculiar celebration held annually, on or about April 25, is the Children's Masquerade. This event, introduced in 1864, has been preserved with all its picturesque features. School children dressed in fanciful costumes dance on the public square and in the downtown streets, then parade to the Comal County Fair Grounds, where a children's masked ball is held. New Braunfels contains what is said to be the shortest river carrying a large volume of water in the United States, the Comal, which rises at Comal Springs and empties into the Guadalupe. With its source and mouth both within the city limits, the Comal's winding course is only about four miles, yet it is deep, clear and full-running. A striking feature of the river is the luxuriant growth along its banks of giant caladiums, whose broad, shield-like leaves add a tropical note to the scenery. The abundant water supply adjacent to New Braunfels is utilized by means of several dams. A $5,000,000 plant supplies electric current to San Antonio and other cities, and to numerous industries. The town's recreational facilities and tourist accommodations are excellent and the surrounding area affords many scenic drives.