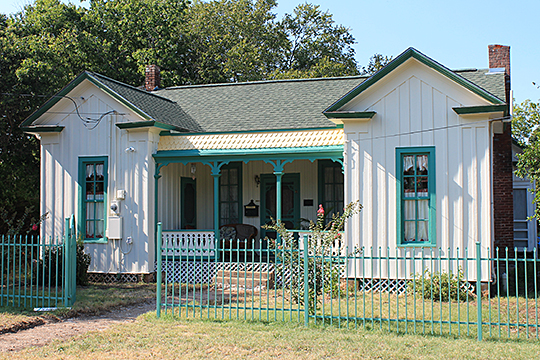 In 1848, Mathias Wilbarger and David C. Cowan surveyed a town site for the new county seat of Williamson County. George W. Glasscock, Sr., who donated the land, stipulated that the settlement carry his name; accordingly, it was dubbed Georgetown. The surveyors platted a 52-block grid on high ground near the confluence of the three tributaries of the San Gabriel River. The town planners designated a public square in the southeast quadrant of the townsite as the center of commercial activity with narrow lots fronting on the streets surrounding the square. The original plan shows that most other blocks in the town were divided into eight parts, oriented east-west, and intended for residential use. The near axial grid provided for orderly growth of the young town, which was idyllically situated above the river.

The City of Georgetown has been the seat of government for Williamson County since both were founded in 1848. In many ways, Georgetown's development parallels that of numerous similarly sized communities throughout central Texas. However, the establishment and success of Southwestern University, the state's oldest such institution of higher learning, has added a unique and highly significant element to the town's history, character, and way-of-life. Georgetown has grown at a steady pace throughout its history, but its most prosperous period occurred between 1880 and 1900. The town's historic resources reflect many of the styles and types of architecture, both high-styled and Vernacular, that were popular in Texas during the late nineteenth and early twentieth centuries. Georgetown's economy has been closely linked with agriculture and county government affairs, and the city has been an important retail and commercial center for Williamson County since the mid-1800s. The majority of people who settled in the community were Anglos who came from the Upland and Lowland South, Swedes comprised the largest European immigrant group, and they settled in the area during the late nineteenth and early twentieth centuries. Georgetown boasts one of the state's most intact courthouse squares.

As the county seat, Georgetown became a hub of activity, attracting residents from nearby regions. The first courthouse, built about 1849, stood on the block due east of the public square. It was built of logs, as were most other structures in the village at that time. County officials soon made plans to erect a more "permanent" stone facility on the public square. The completion of this structure was not realized until 1857, and although plagued with countless structural problems, it stood as an important symbol for the citizens of Georgetown, representing stability and order within the community and the county. It also was the first courthouse to be built on the square as well as was one of the first stone buildings in the city.

Most of the early commercial activity in Georgetown centered around the courthouse square; industrial and manufacturing enterprises were nonexistent. The majority of the businesses in the mid-nineteenth century were services and included such establishments as hotels, stage stops, and blacksmith shops. Because most legal proceedings in the county took place in the courthouse, attorneys established offices near the square. Most merchants also located their businesses on the courthouse square to capitalize on the constant flow of people who came to town on county government business. At first, these stores offered an extremely limited selection of goods, but the increased prosperity of the merchants and the community as whole, in addition to improvements in transportation, enabled the storekeepers to offer a greater variety of merchandise.

The economy of Georgetown during its settlement period was heavily dependent upon agriculture, and the U.S. census records of 1850, 1860, and 1870 reveal that most people in and around Georgetown worked in farm related jobs. The land was fertile, especially to the east and south of town, but to become productive, it had to be cleared. The farms were generally small in size, and the farmers, working to become to self-sufficient, grew such staple crops as wheat and corn to sustain their basic needs. Labor-intensive cash crops such as cotton were rare, as was the institution of slavery.

The physical development of Georgetown proceeded at a slow but steady pace during the middle of the nineteenth century. According to estimates from census records, the town's population had risen to about 320 individuals by 1870. The city itself almost doubled in area when the Glasscock Addition (developed by George Glasscock, Sr.) was added to the original town site in 1854.