Photo: Also known as Sherwood Forest, the John Tyler House (ca. 1780), Charles City, VA. Tyler purchased the 1,200 acre Sherwood Forest plantation in 1842. He lived here in retirement from 1845 until his death in 1862. Tyler expanded the original plantation house to 300 ft. long, but kept it one room deep, making it one of the longest private homes in all of Virginia. A National Historic Landmark, the house was listed on the National Register of Historic Places in 1966. Photographed by William Barrett, 1975, Historic Engineering Record [HAER VA-722], memory.loc.gov, accessed May, 2015. 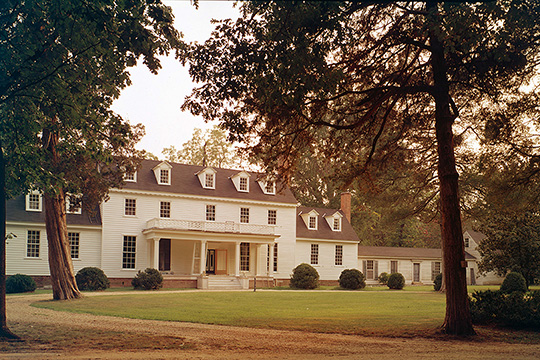 Charles City is an unincorporated community and census‑designated place which serves as the county seat for Charles City County.

The early history of English settlement in the Charles City area remains sketchy. Fragmentary seventeenth-century records relating to the northeast portion of Charles City County suggest that the area between the Chickahominy River and the old Main Road (present-day Virginia Secondary Routes 615 and 623), which follows the high ridge between the Chickahominy and the James rivers, consisted of considerably smaller parcels than the expansive tracts that existed along the James River. It appears that even early settlement along the James River consisted of the largest plantations with substantial populations of labor—first white indentured servants and later black slaves. The Old Main Road has served travellers going east to Williamsburg and west to Charles City Court House, as well as local residents of eastern Charles City County, since the eighteenth century. [1]