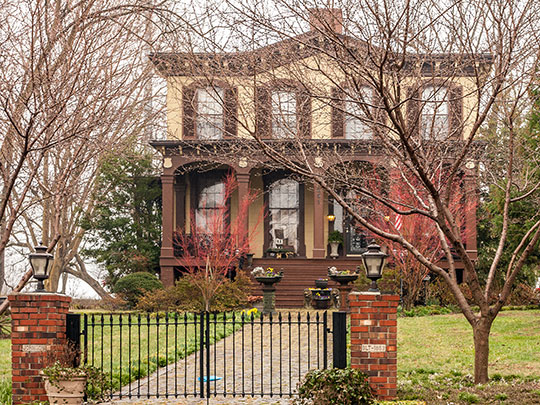 The town of Culpeper owes its life to the establishment of a courthouse for the new Culpeper County in 1749, prior to its 1759 establishment as a town by act of the Virginia Assembly. In 1752, a new structure was built at the northeast corner of Main and Davis Streets (102 East Davis Street). According to the original survey, lot 24, the southern half of the block between East Cameron and East Davis was designated as a public square. A new building was erected in the same location in 1810 but was torn down in 1871. The county seat moved to its present location on West Davis Street after completion of the brick Jeffersonian Revival structure by Samuel Proctor in 1874. The main features include a large, paired Ionic columned portico, colossal round arched windows, a four faced clock tower, and octagonal cupola.

By 1799 the town had begun making its own laws apart from the county, although, Fairfax, as it was originally known, was not incorporated until 1834. Town meetings were held at various locations until 1928 when the Municipal Building, which included town offices and the firehouse, designed by E. A. Walter, was dedicated. The Colonial Revival building owes much of its character to its firehouse accommodations including a false arcade for fire engine doors and a hose tower with arched windows and a pyramidal roof. Internal alterations were made when the fire company relocated in the 1950s.

In 1908 the present jail and sheriff's office was built on the site of the Old Barbour House which served as the old jail and Grant's headquarters in the winter of 1863-1864. The stone lintels, quoins and corner battlements give the jail a distinctive appearance. The courthouse green is surrounded by a wrought iron fence and contains a Confederate Memorial dedicated in 1911.