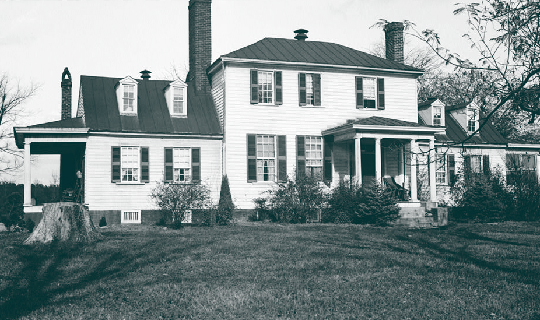 Dinwiddie is an unincorporated community. The Dinwiddie post office is located at 14416 Courthouse Road, Dinwiddie, VA 23841.

Dinwiddie (unincorporated), seat of Dinwiddie County, tapers from widely spaced residences strung along the highway to braces of stores, banks, and churches, which cluster around the court green. Dominating the sloping square is the rectangular brick Courthouse, painted white. The four-columned portico that shields an iron balcony over the entry door, pilasters between the windows of the sides, and a right one-story wing somewhat relieve the building's severity of line. Dwarfed by this solid-looking structure is the tall granite confederate monument, its aloof soldier at rest.

Dinwiddie named in honor of Robert Dinwiddie, governor of Virginia (1751-58), was formed from Prince George County in 1752.

Dinwiddie's history reaches back to May 1607, when Jamestown colonists came to the falls of the Appomattox River—an exploration that Captain John Smith duplicated the following year. Fort Henry, built here in 1646, became a trading post, and finally a town. General P. H. Sheridan's large cavalry force, leading a westward movement to encircle Petersburg, occupied this village on the evening of March 29, 1865. Two days later the forces of General Fitzhugh Lee and General George E. Pickett drove back Sheridan's entire corps and camped near the courthouse for the night. Learning that Sheridan had been reinforced, the Confederates began to withdraw to Five Forks.

Diagonally across from the court green is the two-story, clapboard building that was Winfield Scott's Law Office. Born in Dinwiddie County July 13, 1786, Scott graduated from the College of William and Mary (1805) and then entered the law office of David Robinson in Petersburg with whom he rode the circuit, which included Dinwiddie Court. His military career began in 1808. Commissioned captain of light artillery, he participated in the War of 1812 and the Mexican War, and rose to the highest rank in the U. S. Army. He retired in 1861 and died in 1866.