Photo: The Nelson House (York Hall), located on a lot of the original survey (Main Street) of the Town of York, is today one of the most interesting and elaborate examples of early eighteenth century townhouse architecture in Yorktown. It is generally accepted that this building dates from the first half of the eighteenth century although the exact date of construction has not been determined. Photograph from the collection of George P. Blow, ca. 1915, Historic American Buildings Survey [HABS VA-58], memory.loc.gov, accessed April, 2015. 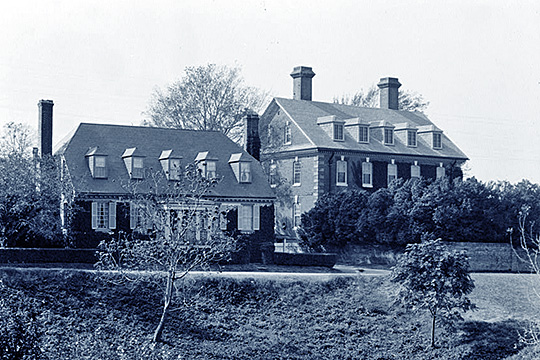 Yorktown is an unincorporated community and census‑designated place (CDP). It is the county seat of York County.

Yorktown was established by the Virginia Port Act in 1691 on the land of Benjamin Read, part of the Captain Nicholas Martiau. The Port Act sought to foster urban development in Virginia and one of its measures specified the procurement of 50 acres to serve as a port for York County. Major Lawrence Smith surveyed the 50 acres and laid out 85 half-acre lots on the bluffs above the river. On the original plat surviving among the York County records, a principle street (Main) running parallel to the river was intersected by seven cross streets. The original street and lot lines remain today. The lots were laid out on the bluffs above the river, but left a strip of land, "a Common Shore of no value" between the town and the river. In this area wharves, stores, lodgings and a considerable business development grew up along Water Street. Although this district was brought into the town in 1738, it remained commons land (as does the beach today) until it was surveyed for lots in 1738.

For much of the 18th-century, Yorktown reigned as a busy commercial town and port. The excellent harbor in the York River, and the fine quality of the tobacco raised on the surrounding plantations combined to make Yorktown one of the most important tobacco ports. Yorktown reached the peak of its growth and prosperity about 1750, although it continued a busy commercial life for another twenty-five or thirty years. Rival points of trade claimed much of the town's business, the center of tobacco moved southwest as the soil of the neighboring plantations wore out, and these were the harbingers of decline even before the siege of 1781 laid waste to much of the town. Yorktown did not recover from the effects of the siege. It ceased to be a commercial center, population dropped, and a quiet rural village resulted.