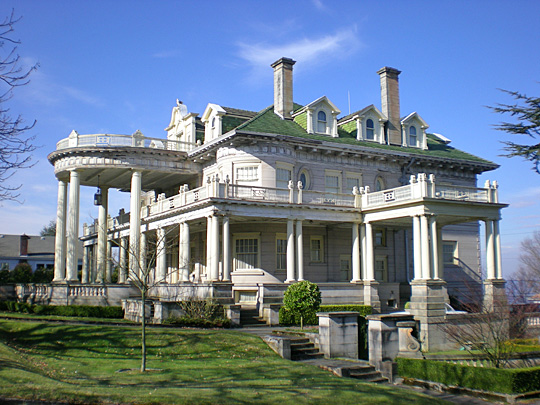 The earliest recorded exploration of the area that would become Tacoma was made by Captain George Vancouver, who in 1792 sailed his ship up the Sound and named the magnificent mountain peak Rainier, in honor of Peter Rainier, later an admiral in the British Navy. Another early explorer was Lieutenant Cadwalader Ringgold of the Wilkes Expedition, who on May 15, 1841, at the beginning of his surveys, charted and named Commencement Bay.

One of the earliest settlers was Nicholas De Lin, a Swede, who arrived on April 1, 1852, and who shortly thereafter started the first industrial development in the new settlement. With the assistance of a few friends, he cleared land near Gallagher's Gulch, at the junction of two creeks, and built a small saw mill. Soon he was cutting lumber with a water-driven saw, the mill being capable of cutting 2,000 board feet a day, if conditions were favorable.

An Indian uprising in the White River Valley and other areas, in 1855, check the growth of the small community for a short time. De Lin worked his mill until 1861, when he sold it and moved to Portland. Job Carr, in 1864, homesteaded land on a site called by the Indians Chebaulip, new Old Town.

Much of the credit for promoting the settlement goes to General Morton Matthew McCarver, one of these who followed the pioneers westward and made a business of staking out tracts in the wilderness, giving names to non-existent streets and selling "cities" to land-hungry people. Having heard of Chebaulip from De Lin in Portland, and seeing the advantage of holding title to the lands that would be needed as a terminus for the Northern Pacific Railway, McCarver traveled to Commencement bay, looked the site over, bought Job Carr's homestead, and with partners acquired additional land. Then, having renamed the settlement Tacoma, he proceeded to boost it as a town with a future. Almost at once the settlers responded to the enthusiastic promotion of McCarver and his associates.

A factor of considerable importance was the revival of the lumbering interest. In 1869 a group of San Francisco businessmen had sent a scout north to look for a mill site; and as a result of his report on the Tacoma location, "the best I've seen," the Hanson and Ackerman Mill was constructed. This started Tacoma toward its future as the lumber capital of the world. Moreover, the advent of the mill started a small-scale boom. Construction workers were followed by mill hands, loggers, shopkeepers, mechanics, and bartenders, many bringing their wives and families with them. The village now became a regular port of call for the mail steamer, which heretofore had passed it by; telegraph connections were obtained; and the first electric lights on Puget Sound flickered at the mill. Other building was stimulated by the advent of the saw mill and the influx of settlers in search of jobs. So sudden and so great was the increase in business that a distinct shortage of currency occurred, and to meet this emergency the Hanson and Ackerman Company issued hammered-metal discs and rectangles to be used locally as a medium of exchange. These circulated briskly and served as a usable means of exchanging goods and services.

During the 1870s Tacoma began to develop its community activities. In 1870 the name of the town appeared for the first time on a map of the State issued by Hazerd Stevens. At about the same time the post office was moved from its inadequate quarters in Job Carr's cabin to the mill office, and the jail, which had been housed in a livery stable, was transferred to a building constructed of two-by-four scantlings for the special purpose of detention of lawbreakers. St. Peter's Church, which claimed to have the oldest bell tower in the United States — a 500-year-old tree trunk — was built in 1873. A hotel and a saloon were opened; it is said the "swearing Deacon," regularly on Sunday nights, put his head over the swinging doors and shouted, "I want every damn one of you to come to church tonight; and you'll each put fifty cents in the collection plate."

The year 1873 was a red-letter one in Tacoma history. On July 14, McCarver, who had clung to his idea that the Northern Pacific Railway would select the town for its terminus, and who had therefore continued to buy up land as a speculation venture until he held some 2,000 acres, and received a telegram announcing the selection of Tacoma for the terminus. Great was the excitement of the town's 200 inhabitants, even though it was soon revealed that the railroad had decided to locate about a mile and a half south of the town. Thus was New Tacoma started among stumps and logs; but within a short time, before the rails were laid into town, a Steilacoom paper could write: "Three new stores, one blacksmith shop, and legions of whiskey mills have sprung into existence in Tacoma since the location of the terminus, and are in full blast. The Johnson Brothers, of Seattle, have moved their extensive stock up here; and in a few days the firm of Hoffman and Frost of Olympia, will move hitherward their tin and hardware establishment." The Pierce County Commissioners authorized the formation of a city government; Thomas Prosch brought the Pacific Tribune from Olympia to Old Tacoma; a doctor came to town, a drugstore was started, more and bigger ships came into the bay, and the first postmaster of New Tacoma, W. H. Fife, was appointed.