Photo: Mount Vernon, WA as seen from across the Skagit River. Photographed by user:User:Valeri Zwick (own work), 2007, [cc-by-3.0 (creativecommons.org/licenses/by/3.0)], via Wikimedia Commons, accessed May, 2013. 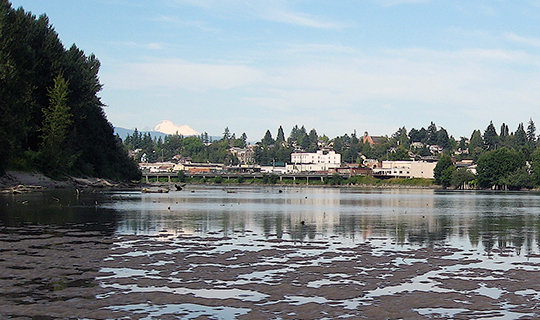 Though Mount Vernon now has a central role in Skagit County, it is a position that it had to win from the other cities in the area. In 1870, when Gates and Dwelley arrived in what would become Mount Vernon, LaConner and Anacortes were the towns of significance, since business and transportation depended on steamers. The Skagit River was not navigable beyond Mount Vernon because of enormous log jams at the river bend. The arrival of Harrison Clothier and Edward English in 1888 marked the true beginning of Mount Vernon. They bought ten acres of Gates' property, platted it with narrow streets, and named the town for George Washington's Potomac River estate.

Between 1877 and 1879, a channel was cut through the log jam, finally permitting river travel up river to the towns that had grown up on either side of it. The opening of the river permitted not only the logging of that area up river, but also access to Ruby Creek, where gold had been found. Both events reinforced Mount Vernon as an important trading and transportation center along the river, which was the backbone of the soon to be established Skagit County.

In 1884, Whatcom County was divided and the southern portion named Skagit County. The competition to obtain the county seat was stiff, but Mount Vernon won, due to support from logging, mining and farming communities versus the divided loyalties given to LaConner and Anacortes by the shipping and fishing industries. Though the actual courthouse would not be built for almost ten years, many professionals such as lawyers and bankers settled in Mount Vernon. The City was incorporated in 1890.

Until 1891, the City was dependent on the river for access to sternwheelers and steamers, fifteen of which connected it to Puget Sound. In 1891, a series of events turned the City away from its dependency. A huge fire destroyed most of the businesses and hotels situated along the waterfront, and many relocated to First Street. The railroad was also being laid through town, 4-5 blocks east of the river. Finally, the river bank eroded, taking Front Street and the west side of Main Street. The construction of the revetment in the 1950s as a final attempt to stabilize the river banks was also the last blow to the City's increasingly tenuous relationship to the Skagit River.

The major floods of 1892 and 1894 motivated the construction of a massive dike system in the summer of 1894. The construction of the wagon bridge over the river in 1893 also symbolizes the beginning of a still continuing battle between Mount Vernon and the river. The floods may have also been the impetus for the construction of homes on The Hill, though it had begun as early as 1891. Indicative of the shift in residential population was the construction of the first Lincoln School (the first brick building in town) in 1881, and the Roosevelt School in 1908. By 1902, the town was described as being situated on several hundred yards of flatlands on either side of the river, and the remainder on The Hill.

The routing of the railroad and the successful battle in 1892 to keep the courthouse, secured Mount Vernon's preeminent position. Though the county still pivoted around Mount Vernon, the axis of dependence and transportation had shifted from east-west along the river to north-south along the railroad. The construction of Highway 99 and Interstate-5 would further underscore this axis.

As logging moved eastward, farming became the main industry. Some shingle mills remained as a reminder of the nearby lumber industry. At one point, Mount Vernon had the nickname of Milk City, due to the three processing plants in the area. The 1890s and the first 20 years of the new century were an exciting and vital period in the growth of Mount Vernon. After its incorporation in 1890, the City began to establish itself as a governing entity, providing services to its citizens. In 1905, the first City officers were elected, and in 1907, the first City Council meeting was held. Schools were beginning to be constructed: Lincoln (1891); Washington (1905); and Roosevelt (1908). Other indicators of the growth and stature of the community were: the construction of the first electrical plant in Skagit County (1891); an Opera House (1892); the locating of the County Fairgrounds here (1901); the interurban trains, then auto and bus service (1912-1926); establishment of a Chamber of Commerce, originally named the Commercial Club (1917); the first and only mixed use project in Mount Vernon, and the Lincoln Theater and office block (1926).