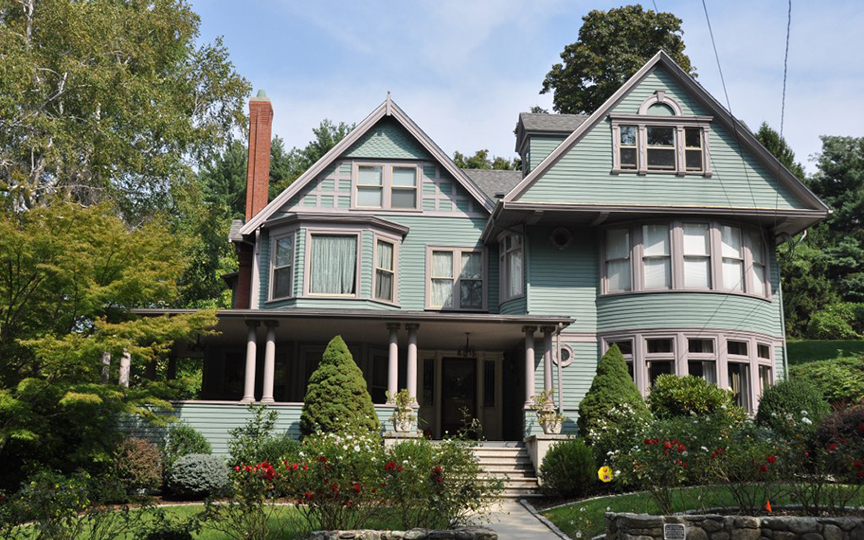 The 1876 U. S. Centennial Exposition featured the Colonial Revival house style. Its design incorporated a variety of early American architectural styles, stimulating a new pride in America's past and interest in historic preservation. There are various forms and deviations of the Colonial Revival. The main areas of elaboration are front entrances, windows, and cornices.

Most common features include:

There were several subtypes of the Colonial Revival:

One subtype was the Classic Box with hipped roof and 2-story square or rectangular design. Dormers were usually present. Some had a full-width porch with classical columns. Others were without porches or featured small entry porches. The two-story rectangular house was also built with side-gabled roofs. Early designs commonly had grand style detailing, usually much larger than the original styles. After 1910, details mimicked the simplicity of the Georgian or Federal style, producing more authentic Colonial houses. A less common Classic Box variant built throughout the Colonial Revival period was constructed with a center gabled roof.

Asymmetrical designs were most popular before 1910 and after the 1930s. These types of homes were influenced by the earlier Queen Anne style often incorporating windows or porch arrangements to complete the asymmetrical shape.

The Dutch Colonial variety featured a steeply pitched front-facing gambrel roof with nearly a full second story. A gambrel roof creates a profile that resembles a portion of a bell, being one or both of the lower roof slopes flare at the eaves. Separate dormer windows or a shed dormer with a series of windows were incorporated into the gambrel roof. Some also included a rear cross gambrel design. The main roof line may feature a full-width porch or and added porch with a separate roof. Shutters were oftentimes solid panel with a decorative cut-out in the shape of a pine tree, bell, or half-moon.

The story-and-a-half Cape Cod designs were adapted from early houses of New England. Georgian and Federal designed doorways were most often included. Attic bedrooms are tucked underneath the steeply pitched roof.

The Garrison Colonial is easily recognized by the second story overhang above the recessed first story. Carved drops in the shape of pineapples or acorns is a traditional ornamentation underneath the overhang.

By the early 20th century, the Colonial Revival style evolved into the Foursquare and Bungalow house styles.