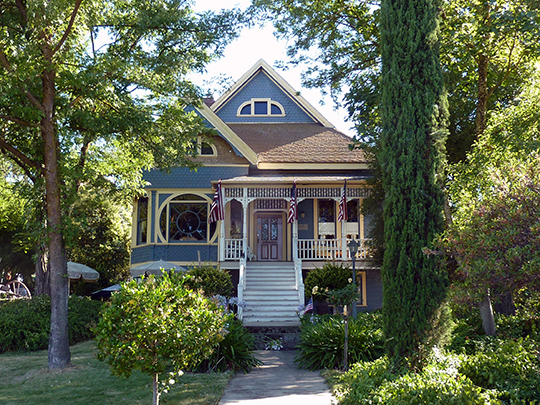 San Andreas, seat of Calaveras County, was first a Mexican town, as a few scattered adobe dwellings built in 1848 indicate. Along the main street—thinly disguised in their modern dress of paint, stucco, chromium and plate glass—are the buildings of the early Yankee era. Documents dating back to 1866 are preserved in the courthouse; relics and historic records, among them a red sash of Joaquin Murrieta, are found in the Calaveras Chamber of Commerce Museum at the north end of town. San Andreans assert that here in the bar-room of the Metropolitan Hotel—which burned down in 1926—occurred the event memorialized in Mark Twain's The Jumping Frog. They also assert—and so do many other gold country towns—that here Joaquin Murrieta began his career of murder and banditry.