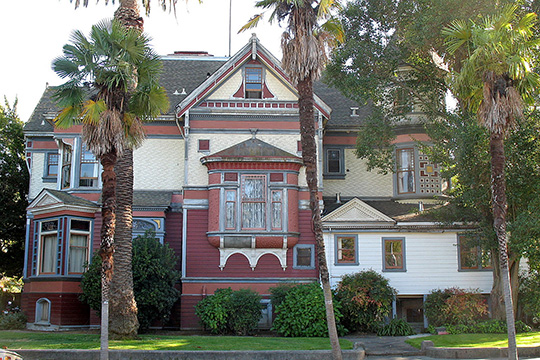 Nathan Coombs laid out the original townsite at the headwaters of the Napa River in 1848. A racing enthusiast and horse breeder, Coombs envisioned a resort that would provide accommodations for patrons of the racetrack he later constructed south of town. Once completed, the new track was never used for commercial purposes and Coombs' new town was not to become a tourist destination until over a century later.

River trade soon helped Napa City become a center of valley commerce. The city's population swelled from 159 in 1850 to nearly 3,500 in its first 30 years. Consumer goods from San Francisco were unloaded from river barges at the wharf located at the foot of Third Street. Agricultural products, timber from the valley's hills, and fine tanned leather were loaded for transport downriver.

River trade also turned the city into a "jumping off point" for miners seeking their fortunes in the silver and quicksilver mines to the north.

By the turn of the century, the once rough and ready wharf city was becoming "civilized" through the efforts of families who had become wealthy from tanning, mining, agriculture, and lumber operations. Napa boasted several fine hotels and a beautiful opera house in its bustling downtown. Vineyards and orchards had been planted during the mid-nineteenth century and the area was well known for its fine wines and brandies.

Some of the original wineries are still in operation and have been joined by over 200 more. Today, as the producer of a highly prized consumer product, Napa Valley's agricultural industry is more than simply a source of local employment. The wine industry has virtually become a local raison d'etre; reminders of wine production and its most important spinoff industry, tourism, extend south to the city of Napa.