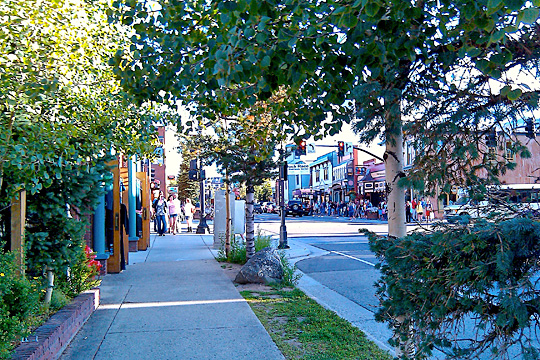 Breckenridge was at one time the center of a group of gold camps claiming a population of 8,000. The first gold was panned in the Blue River in 1859 by a party of prospectors who erected a blockhouse as protection against Indians, and remained until deep snows drove them back to Denver. Their rich finds precipitated a rush the following spring, and for a decade this was one of the richest placer-mining fields in the State. Water was conveyed to the diggings by 50 miles of ditches and flumes. When the placers gave out, lode mining began, and may properties here are still producing.

Bayard Taylor, novelist, poet and correspondent of the New York Tribune, rode into the camp in 1865, "over ditches, heaps of stone to transport provisions, tools, and equipment over narrow trails to remote and all but inaccessible mountain camps; they hauled ore cars and furnished power for early windlasses; and long trains of them brought ore from the mines to the nearest mill or shipping point."

Recreation has always been a part of the Breckenridge community although, until a few decades ago, it only provided entertainment and a break from the major reason people were here, namely to work. There are accounts of early citizens (miners, postmen, etc.) using long wooden hand-curved skis as a means of transportation during the months when snow was on the ground. There are also stories of citizens in other Colorado communities using skis for pure recreation, including races in the 1880's. Thus, it is likely that Breckenridge citizens were also recreating on skis at this time. However, until 1910 there was no organized ski facility in Summit County. Then, sometime just after 1910, a ski jump was constructed near Old Dillon. In the 1930s, a "small ski area on Hoosier Pass" operated for a short time. Finally, with the end of World War II, the veterans of the 10th Mountain Division returned to Colorado to start the beginning of the modern ski industry in the State, which included the opening of Arapahoe Basin ski area in 1945.

In Breckenridge, there was a short rope-tow that operated during the early 1950s at Carter Park, which was put up by the local volunteer fire department. It operated two nights per week and cost 50 cents. Eventually, Breckenridge became the site of the present-day ski area when the owners of a lumber company in Kansas City wanted to log their forest lands and in conjunction decided to open the Peak 8 facilities on December 18, 1961. Not being ski area operators, the ski area was sold after a few years to local investors who had started the Arapahoe Basin ski area. These investors sold the company to Aspen Ski Corporation in the early 70's, and the company exchanged hands several times before being most recently sold to Vail Resorts, incorporated in 1997.

Along with skiing, there were similar introductions and growth in other recreational activities. Two nordic centers were developed to accommodate groomed cross-country skiing. The Recreation Center was constructed to offer traditional indoor activities. The Town built two ice rinks to accommodate skaters and hockey players. There have been numerous parks created throughout the community. A 27-hole golf course was established on the north edge of Town. In addition, the numerous soft-surface trails both within the Town and on adjacent national forest lands provide a venue for two of the most popular summer recreational activities: hiking and mountain biking. These trails also offer opportunities for back-country skiing and snowshoeing in the winter. The community has a stunning recreational flavor that both residents and visitors appreciate. In this regard, the Breckenridge community is not just a niche market and has much more to offer than just the well-known alpine skiing facility.