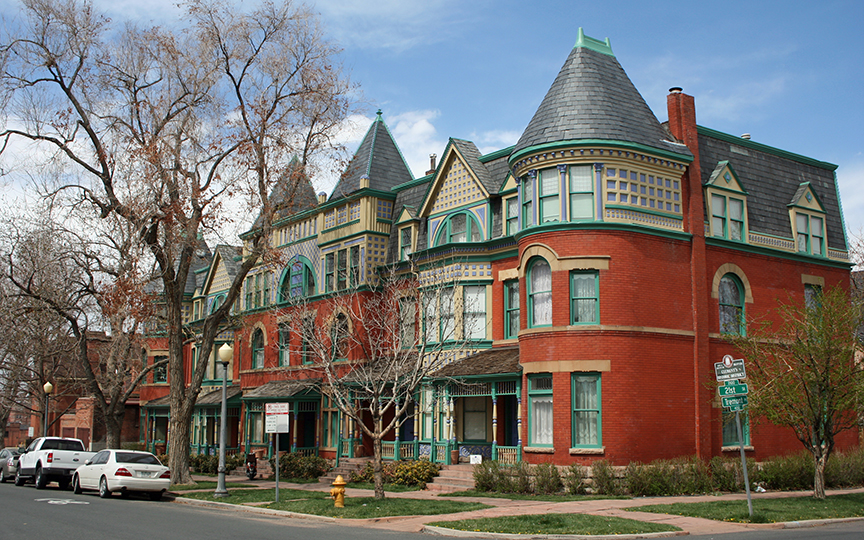 Photo: Row Houses corner of Tremont Place and 21st Street, Denver. Homes are within the Enterprise Hill Historic District which was listed on the National Register of Historic Places in 1979. Photographed by Jeffrey Beall, 2012, (own work) [cc-by-3.0], via Wikimedia Commons, accessed September, 2012.

The name Colorado [†] comes from a Spanish word meaning "red" or "ruddy", the color of much of the state's terrain. Called the "Centennial State", because it became the 38th state when the U.S. turned 100 in 1876, Colorado is most closely associated with the Rocky Mountains and has numerous peaks over 14,000 feet. Prospectors discovered gold in the middle of the last century, and the mining booms beginning in the late 1850s spurred Colorado's initial growth. The state's economy broadened when irrigated agriculture developed, and by the late 19th century livestock raising had become important. Early industry was based on the processing of minerals and agricultural products. In the second half of the 20th century the industrial and service sectors have expanded greatly. The state's economy is diversified and is notable for its concentration of scientific research and high-technology industries. Denver is an important financial center.

Colorado is a state of unusual natural beauty. The scenic wonders of the Rocky Mountains attract tourists in both summer and winter. In the summer and fall, visitors enjoy camping, hiking, hunting and fishing. Old mining towns and Native American cliff dwellings lure tourists interested in history. In winter, skiers visit famous Colorado resorts such as Aspen and Vail.