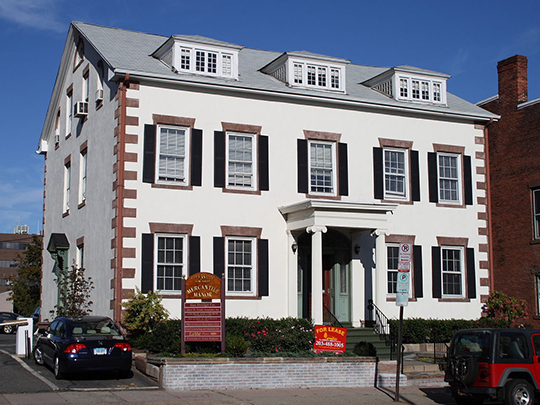 New Haven was the headquarters of the independent New Haven Colony until 1664 when it was merged with the Connecticut Colony.

The Town of New Haven had been planned as nine squares by its founders in 1638. The original nine squares included a centralized parcel of land set aside for public use (although privately owned by "Proprietors") as a town commons. This land eventually came to be known as the Green.

New Haven's first State House was built in 1717 on the Green near the corner of Elm and College Streets. New Haven's colonial courts held sessions under the jurisdiction of the Connecticut charter. The courts were located in this building, and a jail was located nearby. In 1719, the Probate Courts were formed, and a combined state house and court building was built by 1720. It was occupied until 1763. In 1759, the General Assembly passed an act providing for the building and repair of courthouses. In 1763, a new brick State House with courtrooms and a town hall on the lower floor and rooms for the General Assembly on the upper floor was erected on the Green on Temple Street.

After the United States won its independence, a new judicial system, a new code of laws, and new methods of trial were established under the laws of Connecticut, including a County Court system. In 1827, the General Assembly passed an act providing for the building of a new State House, including courtrooms. In 1828, the brick State House was demolished, and in 1831, a State House (designed by Ithiel Town and A. J. Davis) of Greek-influenced design was built near the corner of College and Elm Streets. In 1855, the County Court (also known as Court of Common Pleas) was abolished and its work taken over by the Superior and Justice Courts. The courts were held in the State House until December 1862, when they were removed to Henry Austin's new red brick Victorian City Hall. The Superior Court rented space in City Hall from the City of New Haven. In 1869, the General Assembly created a Court of Common Pleas for the county. This court used the rooms in the 1831 State House formerly occupied by the Superior Courts. The Courts of Common Pleas were established in the counties to lighten the caseload of the Superior Court.