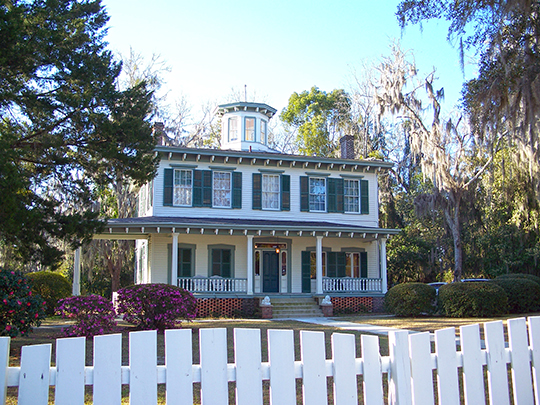 Monticello has a courthouse modeled on Thomas Jefferson's home at Monticello, for which the town was named. Its wide shady streets and old houses have the dignity and charm of the story-book South. Waxy camellias and Cherokee roses have been planted throughout the residential district. Monticello was founded in the early 1800's by planters from Georgia and the Carolinas, who took up land around a blockhouse standing on the site of the present courthouse. For several years the only business establishment was the log cabin of John G. Robinson, whose home was the post office, court room, and social center of the pioneer community.

In Monticello are the headquarters of Florida State Farms, an agency of the Farm Security Administration of the U.S. Department of Agriculture. Its purpose is to rehabilitate farmers on local farms rather than resettle them elsewhere. Farmers select their own tracts of ground, and if the agency approves the choice, loans are arranged for purchase or for long-term tenure lease. In Madison, Jefferson, and Leon counties some 70 farms of this type have been established, aggregating 8,500 acres, planted in various suitable crops.

The Methodist Episcopal Church South, Walnut and Olive Streets, is a clapboard structure with a steep pitched roof, a square bell tower and mullioned windows with pointed wooden arches notable for their carved ornamentation. These carvings and those on the altar, credence table, and prayer desk were done in native woods by a German-born cabinet maker.

Mahan's Nursery, on US 90, has developed a large variety of pecan known as the Mahan, averaging 32 nuts to the pound, and the Dorothy Perkins rose, which has won national recognition.