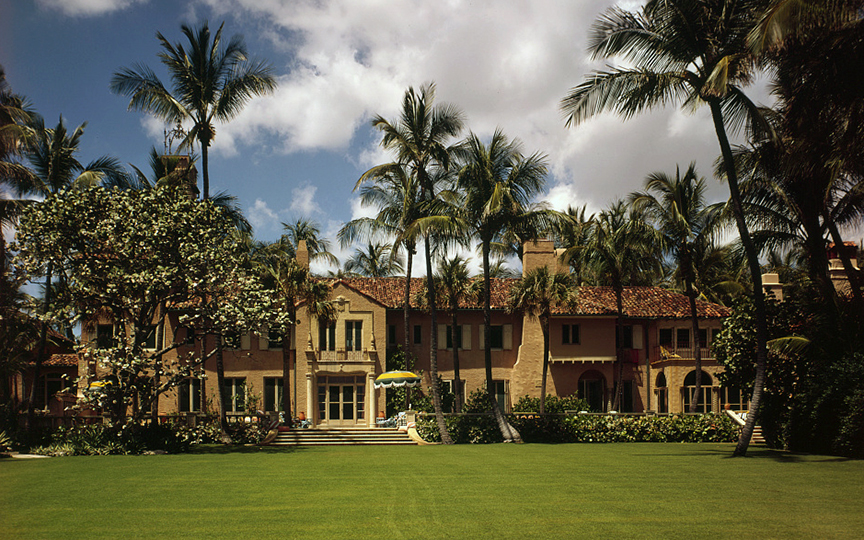 Photo: Casa Apava (The Chester C. Bolton House), 1300 Ocean Boulevard, Palm Beach, FL. Built in 1919, the home is representative of an architectural era in South Florida, and bears the imprint of a well‑known architect of the day, James A. Garfield, who was also the son of a President of the United States. Jack Boucher, photographer, 1972, for HABS (Historic American Buildings Survey.

Outstanding historic and cultural resources give Florida its extraordinary identity. Historic resources are buildings structures, objects, sites, and districts that are significant to the history, architecture, archaeology, engineering, or culture of a local community, the state of Florida, or the entire country.
[Read More]

Florida's historic resources reflect the long and varied history of settlement here. Among the notable examples are the Paleoindian Page/Ladson Site in Jefferson County, dating from 10,000-5,500 B.C.; the Archaic Windover Site near Titusville, which dates from 5,500 B.C.; Crystal River Indian Mounds (500 B.C. — A.D. 200); Fort Caroline, the 16th century site of the French attempt to colonize Florida; the Castillo de San Marcos in St. Augustine, constructed between 1672 and 1696 and the oldest masonry fort in the United States; the Town of Eatonville, established in 1887 as the first all-black incorporated town in Florida; Florida's Old Capitol, restored to its 1902 configuration; the Miami Beach Art Deco Architectural District, a world tourist destination; and the Kennedy Space Center, site of U.S. manned space flights and the launches that put Americans on the moon.

The history of the state is also preserved in Florida's traditional culture or folklife. Among Florida's folklife are shared ways of making objects, such as maritime and ranching equipment, domestic and decorative items, religious and festival arts, and musical instruments; beliefs and customs; traditional occupations; music and dance; celebrations; and narrative traditions. The individuals who produce these folk arts are often greatly admired in their communities. Their creative work facilitates the accomplishment of practical tasks, while expressing group values and aesthetics.

Although the nation's earliest written history relates to events that occurred in Florida, many perceive Florida to be a young state, with important historical development emerging only during the 1920s and again following World War II. Although many of Florida's communities were developed in the 20th century, these major phases of rapid growth give Florida a legacy that sometimes belies a rich archaeology and history that spans many centuries.

People have lived in Florida more than 12,000 years. From the earliest Paleoindian hunters at the end of the last ice age to the powerful chiefdoms encountered by Spanish explorers, Florida's first inhabitants were Native Americans. Adapting to changing climates and widely varying environments, Florida Indians spread to every part of the peninsula. Along the coasts and St. Johns River, shellfish constituted an important resource. Huge mounds of shell still attest to the presence of pre-European villages and towns. On the richer soils in the Florida Panhandle, farming people settled in villages and grew corn, beans and squash. About 1,000 years ago, the well-known Mississippian chiefdoms began to construct large pyramids of earth, some more than 40 feet high, organized in regular patterns around a central plaza. The Apalachee, the Timucua, the Tocobaga, and the Calusa ranked among the largest and most powerful chiefdoms encountered by European explorers. From initial European contact in the early 1500s, in less than 200 years these great societies were virtually extinct, victims of disease, warfare and slavery. The Florida landscape is rich with remains of their mounds, canals, plazas, villages, and other sites. These sites are often the only source of information about what Florida was like thousands of years ago and deserve our stewardship and protection.

Florida was named by Spanish explorer Juan Ponce de Leon when he first saw this land during Pascua Florida, the Feast of Flowers, at Easter 1513. Ponce was followed by other Spaniards who established St. Augustine in the land of the native Timucuan Indian people in 1565. This settlement is the oldest continuously occupied city in the United States. To the West, Pensacola was Florida's only other major Spanish settlement. The Spanish colonized their newfound land by establishing missions among the native peoples. Mission San Luis de Apalachee, at present-day Tallahassee, was the headquarters for a chain of missions that spread east toward St. Augustine.

Over the next two-and-a-half centuries, Florida was an arena of colonial rivalry between the French, Spanish, British, and Americans. Florida became a United States territory in 1821. In 1824, Tallahassee was established as the territorial capital, midway between St. Augustine and Pensacola, the capitals in East and West Florida. Today's Tallahassee stands on the site of what once was the capital of the native Apalachee Indian people.