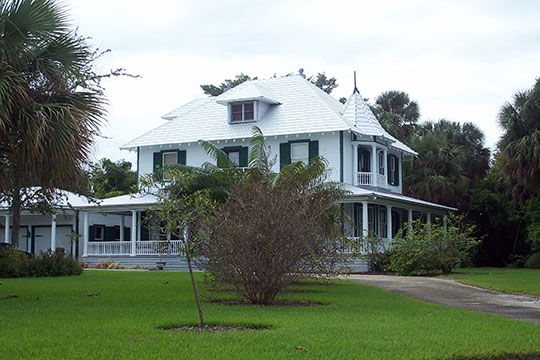 Originally named Potsdam by Otto Stypman, who settled here about 1892; Stypman and his brother Ernest hailed from Pottsdam, Germany. When the Florida East Coast Railroad was built through the area, the name was changed to Stuart for Homer Hine Stuart, another early settler. The town borders the St. Lucie River. Stuart, the seat of Martin County, was incorporated in 1914 and chartered as a city in 1925. [City of Stuart, Sailfish Capital of the World,, www.cityofstuart.com, accessed December, 2013]

Stuart is important for its fishing grounds. Shark fishing is a profitable occupation here. All varieties of tiger-shark, sand, nurse, hammerhead, and shovel-nose are sought for their flesh, hides, teeth, bones, livers, fins, and eyes, the lens of which are crystallized and sold to a large market as insets for rings. Barreled in ice and shipped to extracting plants, shark livers yield from 2 to 14 gallons of oil, with higher vitamin-A content than cod liver oil. The tough thick hides are soaked in brine, tanned, and manufactured into novelties. The fins are shipped to China, where they are relished as a delicacy when properly aged and pickled. The flesh is chopped up and utilized as fertilizer.

Sea gulls assemble at the railroad bridge whenever passenger trains are due, impatient to pounce on scraps thrown from the dining cars. Long before a train is sighted by human eyes or before a whistle sounds, the gulls begin to assemble as if familiar with the timetable; freight trains are ignored.

South of Stuart the route traverses extensive sawgrass marshes criss-crossed by drainage ditches, their banks lined with cattails and willows; it bisects pine and palmetto flatlands scarred by fire, and proceeds through another marshy area, the haunt of white and blue herons, which stand in lagoons or roost in the tops of bushy mangroves. Crossing rolling sand dunes, white in the sun, the highway runs along the Intracoastal Waterway, fringed with cabbage palms and mangroves.