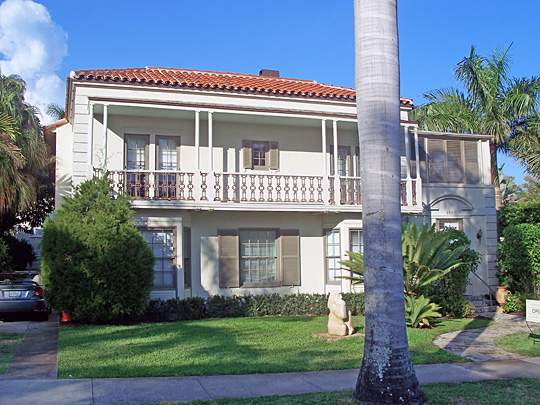 West Palm Beach occupies a ribbon of land 8 miles long and approximately 2 miles wide along the western shore of Lake Worth. Although it is the business and railroad center for Palm Beach on the opposite shore, West Palm Beach, with its large hotels and recreational facilities, is a popular winter resort in its own right. Three ornamental bridges and a ferry connect the two communities.

Coconut palms flourish throughout the business and residential districts; thousands more are set out every year by civic organizations. Bicycles are a popular means of conveyance, but in the closely built-up business area, motorcar congestion has necessitated extensive one-way traffic regulations. Through traffic, southbound, passes over the Old Dixie Highway, and northbound, over US 1, one block to the east. Curio shops display articles fashioned locally of native woods, grasses, shells, and clays. Among the winter attractions is the sailfish fleet, with bases on both sides of the lake, which carries anglers to the Gulf Stream fishing grounds.

A small proportion of the population is of Scandinavian origin, descendants of artisans who were brought here to build the first Palm Beach hotels; others are descendants of New Englanders whose forbears pioneered the district. Blacks live in a colony west of the railroad and find employment as field hands, as gardeners and housemen on Palm Beach estates, and in the hotels of both cities during the winter season.

In 1880, Irving R. Henry homesteaded 130 acres of land embracing all of the present business section. His application for registry stated that his nearest neighbor was 3 miles away, that most of his land was a sandy waste encumbered with swamps, and that he had improved 5 acres at a cost of $500. Thirteen years later Henry Flagler, pioneer railroad builder, having selected the island opposite as the site of his new resort, Palm Beach, purchased Henry's tract and developed it as the commercial section of the new community.

Streets were laid out through the flatwoods; waterworks and other improvements were installed; a post office and schools were established. Stores sprang up rapidly, particularly after the coming of Flagler's East Coast Railway in 1893. When the settlement was incorporated in 1894, it had a population of approximately 1,000, composed almost wholly of workers engaged in building the Royal Poinciana Hotel at Palm Beach.

Wishing to exclude all business enterprises from Palm Beach, Flagler proposed to develop the new town merely as an adjunct to his fashionable colony, but West Palm Beach has long since outgrown its subsidiary position. Until Lake Worth was spanned in 1895, passengers leaving trains in West Palm Beach were ferried across to Palm Beach hotels. The wooden railroad bridge was replaced with the concrete Flager Memorial Bridge in 1938.

In 1909 Palm Beach County was created by division of Dade County, and West Palm Beach was designated as the county seat. Although the population grew from 1,700 in 1910 to more than 8,000 in 1920, it retained the atmosphere of a small town. In 1924-1926, West Palm Beach shared in the real-estate boom. Approximately 100,000 visitors stormed the city and vicinity, many remaining to become permanent residents. Accommodations were inadequate in spite of the erection of 4,000 new houses, hotels, and apartments. Lots in the outskirts originally priced at $250, sold for $1,000, and then soared to $50,000. The population increased to 30,000. For a time the city limits, expanded to include mushroom developments laid out in flatwoods and on built-up swampy areas, embraced 11 miles of Lake Worth waterfront and included part of the Everglades.

Two projects contributed materially to the city's steady growth. In 1925-26 the West Palm beach Canal, extending from Lake Okeechobee to the Atlantic, made the community a local point of the Everglades reclamation district. In addition to drainage facilities, the canal, deepest and widest in Florida, provided a short water route for small craft between the lake and east coast resorts. At the same time the Seaboard Air Line Railway built its cross-State extension, linking Tampa with the east coast cities; this line opened a rich and hitherto neglected agricultural territory, and West Palm Beach became the outlet for its products.

Tourist trade supplies the major part of the city's income, and the sailfish fleets provide a livelihood for a large number of people.

Tropical storms occasionally sweep the Palm Beaches; those of 1926 and 1928 were notably destructive, but loss of life was largely confined to the region around Lake Okeechobee.