Photo: House in the Harbor Oaks Residential Historic District, in Clearwater, FL. The District was listed on the National Register of Historic Places in 1988. Photographed by User:Ebyabe (own work), 2007, [cc-by-3.0 (creativecommons.org/licenses/by/3.0)], via Wikimedia Commons, accessed October, 2012. 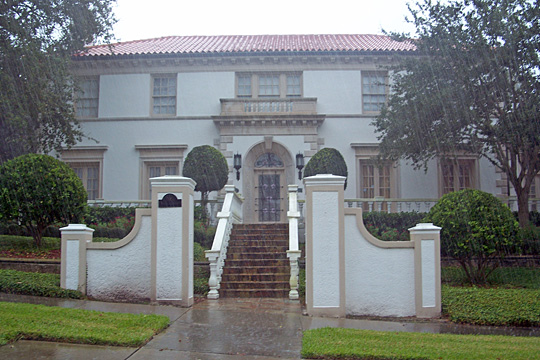 Clearwater, seat of Pinellas County, occupies a high coastal elevation extending along the narrow part of Pinellas Peninsula. A tall white hotel, dominating the skyline, dwarfs the buff brick courthouse nearby. Proximity to the Belleview Hotel has brought to the city wealthy winter residents, whose Elizabethan manors, Florentine villas, and Spanish casas crowd the landscaped bluffs southward along the bay.

After Fort Harrison was established here in 1841, several families purchased land in and near the present site of the city. English and Scotch families followed and set out citrus groves. Clearwater today has 11 packing houses, in addition to several fruit and fruit-juice canning plants. Strings of red and yellow refrigerator cars line the tracks in the freight yards on the east side of town.

The town was incorporated as Clearwater in 1891, three years after the narrow-gauge Orange Belt Railroad reached the city, en route to St. Petersburg. After the freeze of 1894-1895, having lost revenue from decreasing fruit shipments, the railroad was taken over by Henry Plant as part of his system. In 1896 Plant built on the Gulf coast the first of his large tourist hotels, the Belleview.

Pinellas County was severed from Hillsborough in 1912, and in a wrangle over the position of the county seat, Clearwater stole the march on St. Petersburg by building a makeshift courthouse 'over Sunday,' conforming to a legislative act providing that once a courthouse was built, the county seat could not be moved for 20 years. A second railroad, the Tampa and Gulf Coast, now a part of the Seaboard Air Line, was routed through the city in 1914.

Landscaped with petunias, marigolds, and date, cabbage and Washingtonian palms, the Soldiers' and Sailors' Memorial Causeway extends from the mainland to Clearwater Island, with miles of white sand beaches. Here, screened by Australian pines, is a large municipal trailer/car camp. The Clearwater Yacht Club, with clubhouse and boat slips on the bay, conducts a number of races during the winter. Numerous cabanas, cottages and hotels are scattered along the shore. Salt water fishing in the passes and the Gulf waters is excellent.