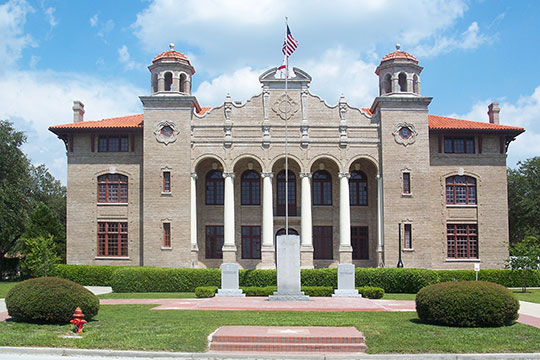 Sumter County became the 29th Florida county and was established January 8, 1853, actually beginning before Florida became the 27th state in the Union. Indians were the earliest settlers of the land that would later become Sumter County. The early Sumter settlers obtained land permits resulting from the Armed Occupation Act of 1842, a program devised by Gov. Richard Call to defeat the Seminole Indians following the end of the Second Seminole War in 1842. This war was the most expensive U.S-Indian War and longest lasting between the American Revolution and the Vietnam War.

Sumter County has had various county seats, changing borders and even gave birth to its neighbor, Lake County, since officially becoming a county in 1853. Sumterville was the county seat until its courthouse burned down in 1909. On June 22, 1910, Judge Bullock of Ocala issued an ultimatum to Sumterville—build a courthouse by March 1, 1911, or face contempt charges. Sumter Commissioners at the time decided not to fight the legal ruling because they didn't want to spend taxpayer's money on the issue. So, on September 1, 1911, a public runoff election between Wildwood and Bushnell was held for the new county seat. Bushnell won, 657-648.

Much of Sumter's growth was stimulated by the Florida citrus industry, with more than 100 Sumter County orange growers reported in 1881, and citrus remained the top industry for the next 10 years. Agriculture and the cattle industry reigned as the rural county's top business enterprises for most of the 1900's. In fact, Sumter communities achieved world agricultural recognition. Center Hill was known as the "String Bean Capital of the World," Coleman was the "Cabbage Capital of the World," and Webster was known as the "Cucumber Capital."

Then, in the 1960's, a new Sumter seed was planted, and evolution began in the county's northern sector. The concept was based on land and lifestyle developed for retirees. Eventually named The Villages, the concept has evolved and encompasses environmentally sensitive land development, new home community clusters, athletic and recreational support services, retail, food, entertainment, health and educational programming, all surrounded by the simplicity of a personal transportation network.

The Villages has become Sumter County's prime public relations and economic engine. It is the nation's foremost lifestyle community, and is designed to accommodate a build-out of 100,000 residents. Although Sumter remains primarily rural, the positive economic impact of The Villages impacts every Sumter resident and enterprise.