Photo: Historic Home in the West Darien Historic District, Darien, GA. The Historic District was listed on the National Register of Historic Places in 2001. Photographed by User:Ebyabe (own work), 2011, [cc-by-3.0 (creativecommons.org/licenses/by/3.0)], via Wikimedia Commons, accessed June, 2013. 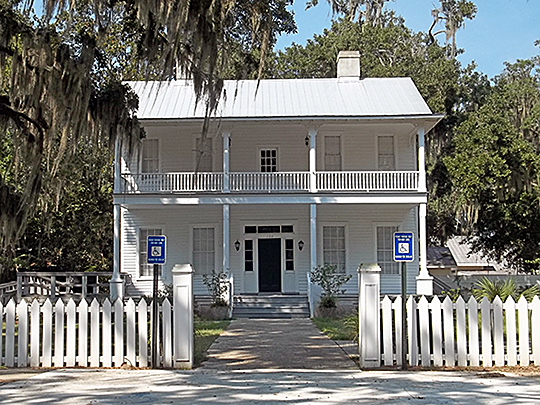 City of Darien was established in 1736 by Highland Scots recruited to staff a military outpost to protect the new settlement of Savannah. They landed at Fort King George and originally called their settlement New Inverness. Fort King George was constructed by General Barnwell in 1721 and was the first English settlement in coastal Georgia. The fort was established to protect English interests against French and Spanish expansion into the Altamaha region. With more than 250 years of history, there is no doubt that the City is rich with a wealth of historic and cultural resources and events.

Next to Savannah, Darien is the second oldest planned City in the state of Georgia. The town was planned General James Edward Oglethorpe in the summer of 1736 on a high bluff overlooking the river about one mile west of Ft King George. The plan included squares laid out with commons on the east and north and acreage lots to the west of Fort King George

The Fort King George site is listed on the National Registry of Historic Places and acts as a major attraction to tourists. The fort was reconstructed using old records and drawings and contains a museum and a variety of different structures open for public tours. Some of the structures at Fort King George include officers' quarters, a guardhouse, blockhouse, moat, and palisades. In addition to the various buildings located at the site, there are also the remains of tabby ruins and sawmills. The site is also part of the Colonial Coast Birding Trail and the Altamaha Scenic Byway.

City of Darien also contains a number of historic churches and other significant landmarks. The First African Baptist Church, Methodist Church, Saint Andrews Episcopal Church and Cemetery, Darien Presbyterian Church are among the many religious landmarks located in the City. The Butler Island Rice Plantation is located south of the Darien River and was recently annexed into the City. This site dates back to the late 18th century and is now owned by the Nature Conservancy. The plantation is open to the public for picnicking, fishing, and bird watching.

Downtown Darien has a number of historic sites that include the Tabby Ruins, Adam Strain Building, Old City Hall, the Grant House, and a number of historic cemeteries. In addition to the individual structures scattered throughout the downtown, the City contains two nationally listed historic districts. The Vernon Square-Columbus Square Historic District is roughly bounded by Market Street, Trumbell, Rittenhouse, and Fort King George Drive. The Old Town Historic District covers one full block and three half blocks; with its center near the intersection of Jackson Street and 1st Street West.