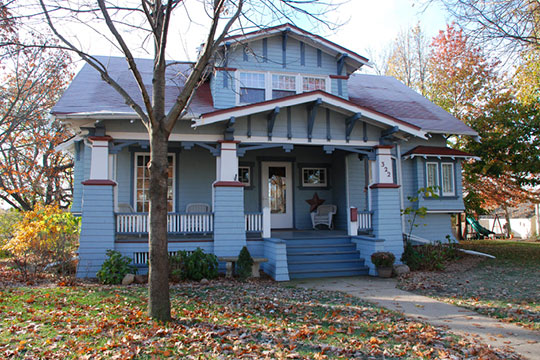 Waverly was established in 1853 along the Cedar River in Washington Township in southwestern Bremer County. Waverly was formally incorporated in 1859, the same year that it was designated as the county seat. Like most Iowa towns established before the Civil War, growth during the early 1860s was deferred until after the war came to a close. Waverly's first railroad, the Cedar Falls and Minnesota Railroad, was extended to Waverly in 1864. Eventually track was also laid for other railroad branch lines and an electric interurban. By 1917 track for the various branch lines had been absorbed by the Chicago and Great Western Railroad and the Chicago, Rock Island and Pacific Railroad. Track for the electric interurban — the Waterloo, Cedar Falls, and Northern — was laid in 1910 but usage was never as substantial as predicted.

Waverly grew in the manner typical of other Iowa county seats in the late 19th and early 20th century. Its commercial center extended along the east-west route of Bremer Avenue on both sides of the Bremer Avenue Bridge that crossed the L-shaped course of the Cedar River as it passed through the center of town. The county courthouse was located outside of the commercial area on a slight prominence at the east end of Bremer Avenue. Residential districts grew up in the four quadrants formed by the intersecting main street and river. The broad, generally flat profile of both the business district and early residential neighborhoods saw the regular occurrence of flooding resulting in the gradual replacement of most first generation frame building stock by more substantial buildings though not outside of the flood plain. German immigrants were among the largest ethnic groups to populate Waverly during the 19th century establishing religious institutions with ethnic affiliations such as St. Paul's Lutheran Church in the northwest quadrant, St. Mary's Roman Catholic Church in the southeast quadrant, and the German Methodist Church in the northwest quadrant.

Bremer County and its county seat of Waverly prospered during the late 19th and early 20th century becoming a retail and professional services center for Bremer County and sections of adjacent Butler County. Population hovered between 2,000 and 3,000 between the Civil War and the turn of the century. By 1901 when the Chicago and Great Western Railroad's consolidation of tracks occurred, the town had grown to include 3,177 people with the downtown and rail corridors containing no less than four newspapers, several harness makers, hardware and dry goods stores, three hotels, several implement and machinery dealers, a marble works, a half dozen attorneys and an equal number of physicians, a canning factory, a brick works, and a substantial cooperage. After 1900, the county's standing as the "Dairy Spot of Iowa," gave rise to a number of dairy industries including a manufacturing plant operated by the Carnation Milk Products Company for the production of condensed milk in the 1920s. Population grew to 3,352 in 1920 at the end of World War I.

By 1940 population stood at 4,156. During Waverly's first 80 years (1859-1939) approximately 26 platted additions were added to the community ranging from small subdivisions with a few blocks on the edge of larger additions such as the Jacob Hess Addition in southeast Waverly to the substantial Harmon and LeValley's Addition that defined most of northwest Waverly west of the Cedar River. Expansion of a Lutheran seminary in Waverly first located in the northwest portion of the community in 1879 and through the expansion of Wartburg College in the neighborhood in 1939 were cultural and economic growth factors for the community. Waverly continued to add approximately one thousand people per decade until 1980 when three decades of post-World War II growth saw Waverly reach a population of 8,444. Continued growth during the next three decades contributed to Waverly's population reaching 9,874 in 2010 while population for Bremer County reached 24,276.