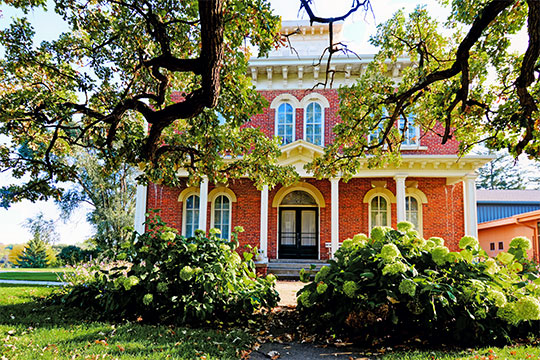 In 1846, the cabin of Rufus B. Clark, a well-known pioneer and hunter of the time, occupied the present site of Independence. In 1847, to protect his land claim, Clark sought the assistance of his friend and advisor N. A. McClure of Milwaukee, and with S. P. Stoughton they succeeded in purchasing four 40-acre lots. In June of that same year, three commissioners appointed by the state visited the county and on the 15th of June, established the county seat and named it Independence. In the spring of 1848, several families moved into the area bringing the total number of families to eight.

As time passed, Independence became more important as a trading point and although there were many new residents, little advance was made in the permanent population for several years. By 1859, Independence had grown into a city of 1,500 inhabitants that consisted of mills and mechanic shops, churches, hotels, a courthouse, numerous stores and hundreds of private residences. The railroad came to Independence in 1859 and was instrumental in the continued growth of the community as well as the county. Interestingly, because the railroad advanced so rapidly and opened new areas for development, it may have also helped to alleviate any potential growth pressures that the community may have experienced.

In 1864, in order " ... to make and enforce ... rules and regulations as are necessary for the health and good order of a town," a petition for incorporation was filed and the act of incorporation was recorded on August 6, 1864, with the first election occurring in mid-December of that year. May 1st, 1873 marked the opening of the "State Hospital for the Insane," located west of town on 300 acres of land. This facility was renamed as a "State Hospital," and subsequently renamed again as a "Mental Health Institute." Currently, the facility serves a 20-county area of northeast Iowa.

In the late 1880s, Independence was brought into national recognition with the development of a racetrack on the western edge of town. The developer of this facility, C.W. Williams, also owned two world-record trotting horses. Together the combination of the racetrack and the two award-winning horses provided a strong attraction for the city that lasted for many years.