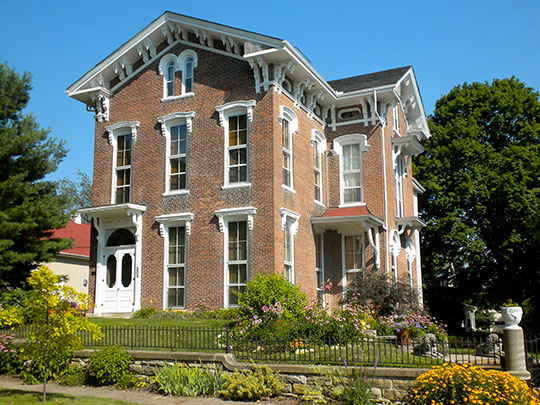 Keokuk, along with Fort Madison, serves as a Lee County seat of government. It is sometimes referred to as the seat of Lee County South.

Keokuk, a city rich in historical associations, is also noted for the great dam that stretches across the Mississippi River before it, and the power house close to the Iowa shore. The city's long main street runs at right angles with the river, following the gentle hills on the plateau and dropping abruptly to the water's edge. The residence district lies to the north of this street and the business and industrial section, south. Many old buildings some of them erected before the Civil War lend an occasional touch of age to the otherwise modern city. Besides the usual business of marketing and trading, incidental to a farming region, and some manufacturing, the area has an unfailing natural resource in its supply of commercial fish. Hundreds of tons are boxed and barreled each year for shipment to St. Louis, Chicago, and other markets. In the early days the Indians called this place Puck-e-she-tuck, meaning "where the water runs shallow" or "at the foot of the rapids." Voyagers and fur traders designated it "The Point." The first white man to make a permanent settlement within the present limits of the city was Dr. Samuel C. Muir (1785-1832) a former surgeon in the United States Army who erected a log cabin here in 1820 for his Indian wife and family. Moses Stillwell and Mark Aldrich opened a trading post in 1829 for the American Fur Company and that same year, at the July 4 celebration, it was proposed and adopted that the settlement be named for Chief Keokuk of the Sac tribe.

Chief Keokuk was three-quarters Indian. His father was a full-blooded and his mother a half-breed Sac. Keokuk was born in 1780 at the village of Saukenuk, not far from the present site of Rock Island, Illinois. Known as an orator of extraordinary eloquence, Keokuk culled his figures of speech from nature and based his arguments on skillful logic. After Black Hawk's defeat in the war of 1832, the Federal Government recognized Keokuk as the principal chief of the Sac and Fox Indians in this vicinity. In 1831 the American Fur Company constructed a row of five hewn-log buildings, the first building boom here; later these cabins were known as Rat Row. The first fully recorded religious services in Iowa took place from October 6 to 9, 1832. During that period Father Van Quickenborne conferred the Sacrament of Baptism and performed five marriages. The first schoolmaster in Keokuk was Jesse Creighton, a shoemaker, who in 1834 had a class of eight pupils.

In the spring of 1837 the city was platted by Isaac Galland (1790-1858), an agent of the New York Land Company. Itinerant preachers of various faiths began about this time to hold religious services in the town's auditorium (one of the Rat Row buildings), a long log building running along the levee near what is now the foot of Main Street.

Beginning with the 1840s Keokuk was the manufacturing and jobbing headquarters for the pioneer Middle West. In the early days before the railroads, when rivers constituted the main means of transportation, it was known as the Gate City, not only for Iowa but for the North and West as well, because of its position at the foot of the Des Moines rapids on the Mississippi. Steamboats were unable to go beyond this point. All passengers and freight had to be unloaded here and lightered over the rapids or continue the journey on land. Up to this time the Half Breed Tract was involved in many disputes between Indians, white men, and half breeds as to title to individual holdings. Francis Scott Key, who wrote The Star Spangled Banner, national anthem, had a part in settling the litigation involved here. An attorney for the New York Land Company in 1841, he drew up the decree of partition of the lands. The plat established then is the basis for all titles today. The city of Keokuk was incorporated under a special charter in 1847.

A medical college that became the first medical department of the University of Iowa was established here in 1850, and moved to Iowa City in the 1860s. From a scientific standpoint the geological formation of the Keokuk area early proved interesting, the surrounding sections becoming classic in the annals of geology. Keokuk was the starting point for the classification of the Lower Carboniferous limestones throughout the entire Mississippi basin, being defined and described according to modern geological methods in 1858. Nearly the entire county is underlaid with this limestone, every variety of which affords a good grade of stone, easily quarried and readily dressed.

During the Civil War, Keokuk served as the port of embarkation of practically every Iowa regiment (except cavalry) and for those of several neighboring States. During this period more than 200 Keokuk citizens were commissioned officers, many serving in the higher commands. Six war hospitals were established here to care for the wounded, later resulting in the creating of a National Cemetery, the only one in Iowa.

A railroad line was established in 1856 to haul freight from Keokuk to a point about 12 miles up the river, beyond the rapids, where the materials were loaded on boats again for points beyond. In 1870 this short line was taken over by the Chicago, Burlington & Quincy Railroad. The navigation problem of the five hazardous chains of rapids above Keokuk was finally solved when a canal, built by the Government at a cost of $7,500,000, was opened for river traffic on August 22, 1877. The canal, with three locks, was nine miles long and 250 feet wide, with a minimum low water depth of five feet. Keokuk's supremacy as a river port, along with that of other river towns, had gradually declined with the coming of the railroads, but from 1910, when work was started on the Keokuk dam, the city entered into an era of renewed activity.

Keokuk has many reminders of the colorful days of the nineteenth century when the State was being settled and the town gained its title of Gate City. Under the waters of Lake Keokuk and back of the great power dam of today lie the rocks that caused the early rapids in the river. The Mark Twain Zephyr, a streamlined train named for the great humorist, streaking into town, is a reminder that Mark Twain (Samuel Clemens, 1835-1910) once lived and worked here.

Mrs. Annie Wittenmyer (1827-1900), who organized the Army diet kitchens during the Civil War, made her home in this city. Two Secretaries of War were among other Keokuk people to call the city home W. W. Belknap, appointed in 1869, and George W. McCrary, in 1877. John W. Noble of this city took office as Secretary of the Interior under President Benjamin Harrison in 1889. Mary Timberman (1863-1899), actress, was born here and received her early dramatic training under a talented mother. Miss Timberman acted with Robert Keene, and in supporting roles with Richard Mansfield, Robert Mantell, and others. Cornelia Meigs, who was awarded the Newberry Medal for 1933-34 for Invincible Louisa, her biography of Louisa M. Alcott, received her education in the Keokuk schools, where Rupert Hughes, another writer of repute, was also educated.