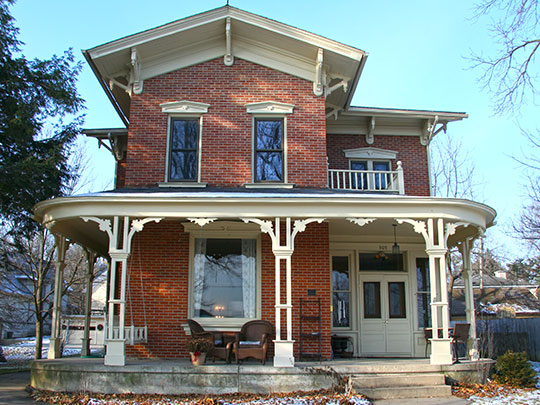 Decorah was established as the county seat in 1851. The city was platted two years later in 1853. Decorah was named after Waukon-Decorah, a prominent Chief of the Winnebago Indian Tribe. Other Native American tribes that occupied the area were the Sauk, Fox, and Oneota.

Nine members of the William Day (1791-1860) family are credited with being the first settlers of Decorah, Iowa. History shows the Day family camped beside a spring, now known as Day Spring, and shortly began building. In March 1849, they were joined by the William Painter (1820-1902) family and by John Sutton Morse (1808-1887). It is stated that Day built the first Hotel, now known as Hotel Winneshiek, while Painter and Morse focused on milling in Decorah.

The railroad reached Decorah in 1869 and provided transportation for passengers and freight for nearly 100 years. Wagons and horse drawn coaches were the only other alternative for moving citizens and commercial goods. Railroad service ended in Decorah in February 1979.

Although the settlement began in 1849, Decorah was not incorporated as a city until 1871. The small settlement was designated the county seat in 1851 and the first county courthouse was built in 1857. In 1903 the court house was replaced with today's present building. The jail, located near the courthouse, was built in 1887.

The first plat of the city, what is now known as "Original Decorah," was made in 1856. West Decorah, or the settlement on the other side of the Upper Iowa River, was incorporated in 1878, and legally recognized by a legislative act in 1894. The two settlements, Decorah and West Decorah, did not merge into a single unit until 1902.

Education was important to the community and its settlers as well. The Norwegian Luther College, a private four year liberal arts school, was established in Decorah in 1862 with the purchase of 32 acres for the college. The first building on campus was built in 1865.