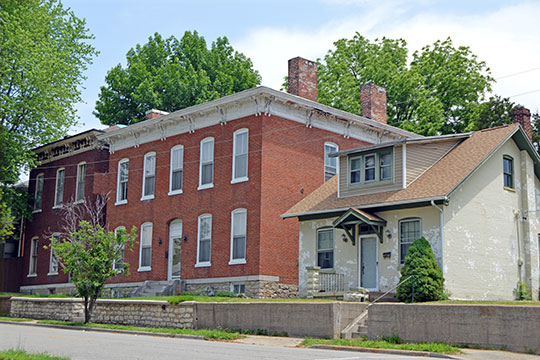 Belleville, whose fine houses and shady streets justify its name (French for beautiful city). Belleville is perched on top of the steep bluffs that form the eastern rim of the American Bottom. Although there were settlers in the Belleville region at the beginning of the nineteenth century, it was not until 1814 that the settlement was chosen as the seat of St. Clair County, succeeding Cahokia. A town was laid out, and immigration increased in 1818 when Territorial Governor Ninian Edwards, a large landowner, advertised the settlement in newspapers throughout the country and offered inducements to settlers. At that time Belleville was a place for hardy people; fighting was the principal pastime; one Zachariah Stephenson gained local fame for his willingness to fight anyone, anywhere, any time. In one of the bouts Zachariah's opponent bit off part of his ear, and Zachariah retaliated by biting off his adversary's nose. In 1819 the town was incorporated. Nine years later the discovery of coal underlying the area attracted a host of German immigrants.

Belleville is still known as a "Dutch town," and German is the only language spoken by many of the older inhabitants. Singing societies, such as the locally renowned Liederkrantz, founded in 1873, and such neighborhood customs as the kaffe klatsch, further indicate dominant Teutonic influence. The old brick houses on the side streets radiating from the public square are built against the property line in accordance with Old World custom.

No town in Illinois manifests such a bewildering combination of old and new in architecture; 1930 bungalows rub elbows with dwellings built in 1830. Nowhere else in Illinois can be found block after block of century-old, one story brick cottages. The universality of brick construction, even for the humblest dwellings, is due to the fact that Belleville, a hundred years ago, abounded in brick manufacturing plants, making home-kilned brick the cheapest construction material available.

Of massive proportions, and of sturdy and enduring construction, the two story brick Governor John Reynolds Mansion, 110 North Illinois Street, has defied time and looks much the same as it did at the time of its construction in 1820; it is now used as a funeral home. The twin spires of the Gothic Cathedral of St. Peter (Roman Catholic) tower above the corner at 3rd and Harrison Streets.

At 5 o'clock on the afternoon of March 5, 1938, a tornado, which caused wide-spread damage throughout the East St. Louis area, struck Belleville, killing eight persons and injuring many others. In the West Main Street residential district some 50 houses were leveled. A grade school, deserted at that hour, was demolished, but Belleville's large high school, 200 yards distant, was untouched.