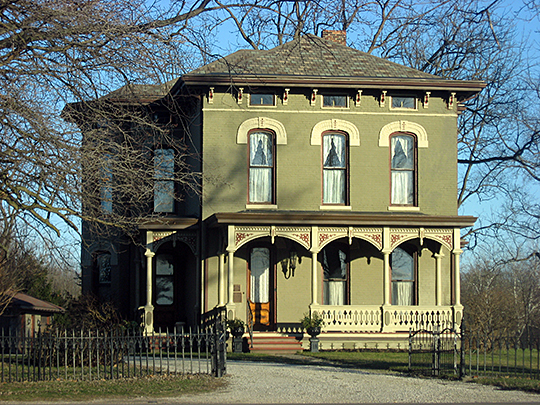 The City of Muncie has built a steady foundation from its long rich history. It has felt growth and decline throughout its existence, but its strength in character has allowed it to overcome most difficulties in its path. Before Muncie became a city, the area along the White River, which can be described as the present day downtown, was home to Munsee/Wolf Clan of the Delaware Indians. The establishment of this area lead the way to a tribal town called Munseetown, which later became Muncie.

In 1886 a gas boom occurred drawing industries around the country to central Indiana. Muncie became the center for glass and steel manufacturing in the state. The most notable of these manufacturers was the Ball brothers and their glass manufacturing company. The Ball family moved to Muncie in 1888 and remained there until 1998. Not only did the Ball Brothers and then later Ball Corporation bring jobs and a steady economy to the City of Muncie, but also a level of philanthropic support that supersedes anything their company ever accomplished. The Ball family donated funds and support for a variety of community projects, such as like the acquisition of the Indiana State Normal School, and later Ball State University, and the donation of over $2 million for the construction of Ball Memorial Hospital.

After 1910, the second emergence of industrial development occurred due to the need for tool and die manufacturers for the new wave of automobile use. One of the leading manufacturers in the early part of the century was Warner Gear; this company later merged with the Illinois parts maker Borg and Beck to create a "multi-national firm that was a major Muncie employer throughout the 20th century."

In 1929 Muncie became known as "Middletown" or the typical American City when the husband and wife team of Robert and Helen Lynd conducted the Middletown studies. The studies looked at a variety of issues and characteristics that cities and towns dealt with on a day to day basis. Even today, many classrooms and sociological analyses are still finding these studies relevant. In 1935, the Lynds followed up with a second study, Middletown in Transition and in 1977, the University of Virginia conducted a further study of Muncie, called Middletown III, to determine what changes may have occurred since the Lynds' second study. Although Muncie became known as "Middletown" the recognition did little for the town in regards to benefits or fame.

Muncie was home to several attempted Normal schools throughout the end of the 19th century and the beginning of the 20th century. Because of a donation by the Ball Brothers in 1918, the Indiana State Normal School opened and flourished throughout the century. The Normal School later became the present day Ball State and received University status in 1965. Ball State University has played a major role in the growth and development of the Muncie community.

During the 1960's, Muncie grew geographically with the expansion of the Muncie Sanitary District. Rural residences could now have the same benefits and service protection that the residents of the city utilized. With this increase in services came the annexation of rural Delaware County into Muncie's city limits. Efforts to continue to annex rural Delaware County over the last three decades have remained constant, in attempts to allow Muncie to grow and expand with the times.