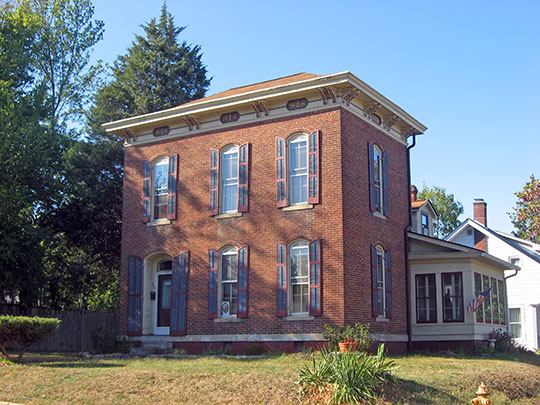 Among the early settlers of Johnson County was George King, who purchased property from the Federal government near the future center of the county and became active in the organization of the local government. In 1823, King donated 51 acres to the Johnson County Commissioners for the location of the county seat. The emerging community was named "Franklin" by Samuel Herriott, the first clerk of Johnson County and an admirer of founding father Benjamin Franklin. Franklin quickly developed as a pioneer village, a center for the larger Johnson County agriculture community, and the seat of county government. The arrival of the first railroad in Franklin in 1847 resulted in accelerated commercial and industrial activity and population growth. With the development of the railroad and more industries, Franklin's economy began to expand beyond sole reliance on local resources. By 1849, the town reached a population of about 1,750.

With an 1861 population exceeding 2,000, Franklin gained the status of "city," and Benjamin Davis was elected its first mayor. With an organized city government, Franklin was able to offer more advanced city services, such as fire and police protection, and paved streets and sidewalks. The later decades of the 19th Century brought additional industrial growth and technological advances to the City of Franklin. A significant 20th Century marker in the evolution of the community was the construction of the Noblitt-Sparks auto parts manufacturing plant in the 1930s. Now known as Arvin Meritor, this facility combined with the local government offices, agribusinesses, institutions, and a number of smaller industries to provide a diversified local economy. This diversity has continued to the present day as the significance of agribusiness has declined and industries such as Mitsubishi Climate Control, Musicland, Owens-Illinois, and Franklin Power Products complement the local government and institutional employers.