Photo: Grouseland (William Henry Harrison House), ca. 1804, Scott Street, Vincennes, IN. The house is located within the Vincennes Historic District. Harrison was the 9th President of the United States. Listed on the National Register of Historic Places and declared a National Historic Landmark in 1960. Photographed by User:Nyttend (own work), 2011, [cc0-by-1.0 (creativecommons.org/publicdomain/zero/1.0/deed.en], via Wikimedia Commons, accessed August, 2013. 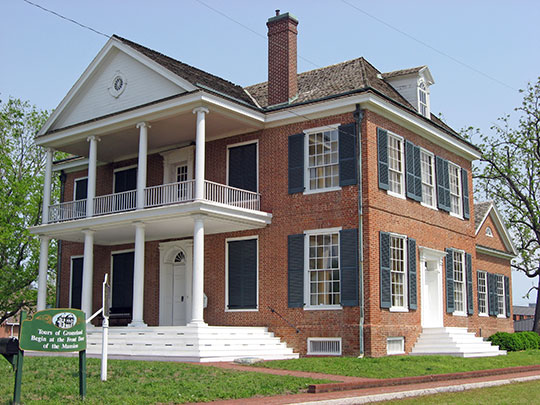 Vincennes had one of the oldest and largest of the French Forts in Indiana and as such is perhaps one of the oldest continuously inhabited areas in the State. An early Piankeshaw Indian Village spread out along the edges of the Wabash was there to greet the early French trappers and hunters who explored the area at the beginning of the 1700s. The French settled the area, married with the Indians, and brought protection in the form of a military fort by 1733.

Thirty years later, in 1763, England gained control of the settlement for a period of some 16 years. However, British influence on the town has been slight.

In 1779, George Roberts Clark captured Vincennes for the American cause which in turn contributed to the addition of much of the area — the Old Northwest Territory of the United States. By this time, Americans had begun to cross over the Alleghenies and into the Wabash Valley. By 1800 they had taken over much of Vincennes and French influence slowly blended with American traditions.

From 1800 to 1813 Vincennes was the capital of the Indiana Territory. William Henry Harrison, Governor of the Territory from 1800 to 1812, built his house (Grouseland) in 1804 and lived in it until he resigned as Governor in 1812. Following the removal of the capital to Corydon in 1813, Vincennes lost some of its importance to the State and National Political scene, but continued to grow as a commercial town serving as a steamboat port and center for the farming community. It also housed Vincennes University, the first institution of higher learning west of the Alleghenies and north of the Ohio River. When the Wabash and Erie Canal bypassed the town several miles to the east, Vincennes lost some of its commercial importance and it was not until the coming of the railroad that Vincennes again became an agricultural trading center.

Vincennes was also a center of culture and learning in Indiana for many years. The institutions associated with the Catholic Church provided education to both the settlers and the Indians. Vincennes University operated at several locations in the town and continues today. The Vincennes Library Company (1806) was an important effort to provide a resource for the frontier community. In 1838, Father Simon Brute brought his large library from Europe and the East to Vincennes to further expand the cultural resources of both the town and the State.