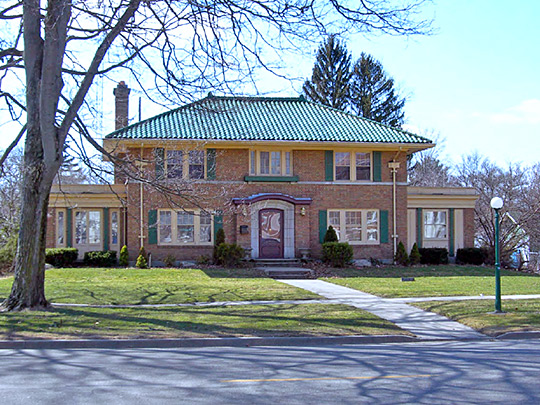 The Michigan Road opened development of the Marshall County area. Plymouth was founded in the center of the county on the road in 1834. The original plat of Plymouth and its historic commercial district are located two blocks north of the boundary of the district. The idea for a north/south route connecting the state came at a time when the National Road was being constructed through the state east to west. Growing public pressure to ensure a passable road that would lead to lands not yet opened for settlement, particularly in the north led Indiana's road commissioners Lewis Cass, John Tipton, and James Ray to include in an 1826 treaty with the Potawatomi an agreement to succeed a strip of land 100 feet wide from Lake Michigan to the Wabash River. Included with this was the succession of one section of good land contiguous to it for each mile. In 1828 the road commissioners were charged with identifying a route for the road/strip of land. The final selection moved the road further east to avoid the Kankakee swamps and placed it through the area that would become Marshall County. Construction of the road began in 1830 at the Ohio River and in 1831 in South Bend.

The road through Marshall County was let for construction in 1832 and in 1834 Plymouth was platted at right angles to the road, which followed a slight northwest route as it entered the town, but adjusted more northerly as it continued through the original plat. The founders of the town were James Blair, John Sering and William Polke. Polke was made the sole road commissioner for the state of Indiana in 1831 and was charged with the completion of the Michigan Road. Plymouth was platted at the junction of the Michigan Road and the La Porte Road, on the north bank of the Yellow River. While early residents of the town and county traded with the Menominee band of Potawatomi, in 1838 this band was forcibly removed from the lakes area southwest of Plymouth and that land became available to settlers.

Plymouth was officially organized as a town in 1851 and incorporated as a city in 1873. In 1856 the first railroad was constructed through the town bringing additional development. Three additional railroads were constructed through the city in the mid to latter part of the nineteenth century. This created an explosive time for population growth and economic development. Out of this, the fine residences and estates began to appear on Michigan Street.